Gender distributions in academic departments: What do they say? 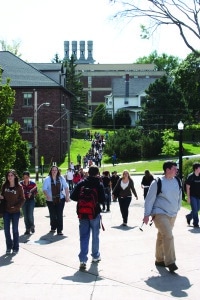 Judith Holton, a professor in the commerce department, said business studies may attract more male students because there are more male business leaders than female due to systemic sexism in the business world.

“There are a lot of stereotypes that hold back women getting into prominent positions in business. There are lots of women in support roles, in middle management, supervisory positions, but they don’t necessarily make it into the top levels of business,” said Holton. “So it may be that men more naturally see themselves [in business] because we’ve got all kinds of male role models.”

A similar sentiment was shared by Jeehan Jawed, a fourth-year commerce student.

“There’s that stereotype that if you’re bossy, you come across as a bitch as a woman in a leadership role…whereas if you have a male at the front of it, they’re just doing their job,” said Jawed. “That’s something we see all the time in the media and portrayed across different fields.”

The bachelor of fine arts has the highest female-to-male ratio of any degree program, at 4:1 on average over the last five years. However, as a smaller department, numbers vary more year by year.

“I think that, like any program, we’re affected by gender norms,” said Izzy Francolini, a fourth-year fine arts student. “I do question what people are pushed for when they’re younger. Like if you’re a boy you should be playing sports – ‘Boys should be doing this, boys should be doing that’ – and girls are [told], ‘Oh you can draw…you can do nice stuff.’”

The bachelor of music also has a high average female-to-male ratio, with about 70 per cent of graduates being women over the last five years. Stephen Runge, department head of music, said the ratio is even higher at younger ages, but that men typically dominate senior educational and career positions in music.

“The younger you go the more there’s a differential that seems to be in music in general,” said Runge. “Whether it’s just tradition or that very now-outdated idea that certain things are ‘girl stuff’ and certain things are ‘boy stuff,’ I’m hoping that we’re getting away from that.” 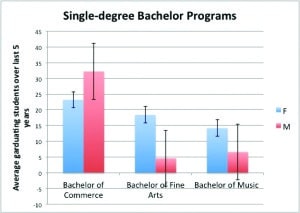 Most arts departments have high ratio of women to men

Psychology has the highest female-to-male ratio of larger departments in the bachelor of arts program, with women making up 77 per cent of graduates on average. Jennifer Tomes, department head of psychology, said in an email to the Argosy that this gender ratio is true of psychology as a field in general. She also said some psychologists are concerned that a higher number of women in the field may cause it to be viewed as “a helping profession” and not be taken seriously as a discipline.

“I think when we’re dealing with questions of gender and using feminist theories and lenses to approach a problem, it resonates [with female students] and it’s viewed as normal and something that’s perfectly legitimate and acceptable,” said Thomas. “It probably opens up spaces to deal with those things in a more productive way than if you had a bunch of people who didn’t like it.”

Economics, philosophy, and commerce are the only major programs which, on a mean-average basis, have more men than women among bachelor of arts students. A few small major programs had only women graduates over the last five years, including art history, Hispanic studies, modern languages, literature and culture.

It’s no secret that more women study at Mount Allison than men – its average student female-to-male ratio over the last five years is about 6:4. This is not the case in every department or discipline, however. Student gender ratios vary considerably between Mt. A’s five bachelor programs, as well as within those bachelor programs among majors. Despite this variability, student gender ratios among disciplines at Mt. A are in line with national trends in postsecondary enrolment, and may reflect societal and cultural norms that influence men and women to pursue different fields of study.

These gender ratios generally reflect those for universities nationally. According to Statistics Canada, 1,300,440 Canadians were enrolled in university programs in the 2013-14 academic year. Of those, about 57 per cent identified as women and 43 per cent as men. Research has shown that a student’s decision to attend university and choice of program is influenced by educational factors in primary and secondary school, and that these factors differ for children of different gender.

“A lot of it has to do with how young people are socialized into what are ‘acceptable’ professions and areas of studies for different genders,” said Dave Thomas, department head of politics and international relations. “Based on the way we raise children in our society and the way schools deal with children, there are very gendered consequences to the way those things are happening.”

A study published last year by the Higher Education Quality Council of Ontario found that grades and course selections in grade nine students accounted for 70 per cent of the reason more women apply to university than men. Male high school students gravitated toward applied classes that typically led them to secondary technical programs and college degrees, whereas female students gravitated more toward academic classes and eventually university programs. 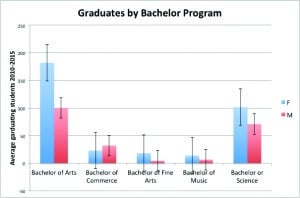 The male-to-female ratio of students at Mt. A is consistent with those of universities across Canada. Argosy archives 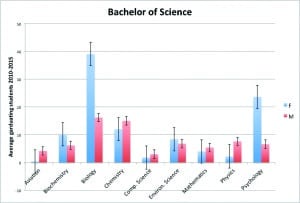 Psychology, which has majors in both the bachelors of science and arts, has the highest female-to-male ratio among graduates of bachelor of science programs, with 78 per cent of graduates being women. The department of biology has the second-highest, at 71 per cent women. Suzie Currie, department head of biology, said that while undergraduate biology programs tend to have more women, graduate, postgraduate and academic positions tend to be dominated by men, a phenomenon known colloquially as the “leaky pipeline.”

“As you go through grad school [a higher] number of women drop out, so that ratio becomes completely skewed in the other direction with higher learning,” said Currie. “The leaky pipeline is less leaky for biological sciences, but it’s still there.”

Physics, mathematics, computer science, chemistry and aviation have more male than female graduates on average. According to the registrar’s office, two women have graduated in aviation in the last five years. According to Beth Freeman, an instructor at the Moncton Flight College who teaches Mt. A aviation students, women account for only 6 per cent of professional pilots.

“Traditionally men gravitate toward positions of power and being in control of an aircraft gives you that,” said Freeman in an email to the Argosy. “Initially I think that because it isn’t a typical career choice many women don’t think it’s actually a viable option. That said, the fact that so few women are in aviation I would think would empower them and make the experience that much more rewarding.”

Eighty per cent of graduating physics students are men. Catherine Lovekin, the only female professor in the physics department, said this is typical of physics as a field.

“I think it’s a larger cultural problem. It’s not girls not going into physics that’s the problem. Broadly speaking it’s how physics and math are viewed – they’re viewed as hard and not something that girls do, and that needs to change,” said Lovekin. “It needs to change across society more broadly, especially at younger levels. Just show the girls that they can do this, they’re just as good as the boys at this kind of thing.”

Currie also said that women might be more drawn to biology because they’re discouraged from a young age to pursue quantitative sciences.

Hannah Stegen, a fourth-year physics student, said that she was compelled to study physics in high school due to an inspiring teacher.

“I feel like in our year some of the smartest people in the class are females and they do dominate,” said Stegen. “So it’s clear that there’s not equity, but representation-wise there is. We don’t struggle at all.”

The data presented in this article was collected and provided by the registrar’s office. The registrar’s office collects students’ gender information when they apply to the university, a provision required of all Canadian public universities by Statistics Canada. According to section 10.4.1 of Mt. A’s academic calendar, students may request Statistics Canada remove all identifying information attached to their enrolment data. The registrar’s office did not collect data on non-binary applicants for the data shown, as it will only begin collecting data on non-binary students in the upcoming 2016-17 academic year.