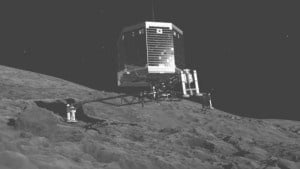 Spaceflight history was made on Nov. 12, when the European Space Agency’s Philae spacecraft became the first manmade object ever to land on a comet.

The event was the most recent chapter in the ESA’s Rosetta Mission, which included the first satellite to successfully reach and orbit a comet on August 6. Since that time, the orbiting Rosetta satellite, which carried Philae from Earth, has sent back spectacular images of this comet, known as 67P/C-G.

After a series of malfunctions, Philae was almost destroyed upon landing, and 57 hours later on Nov. 14, it ran out of power. In that time, it conducted five of its top priority experiments on the comet’s surface, which the mission’s scientists hope will answer outstanding questions about comets, which may be the source of Earth’s water and life’s building blocks.

Philae had piggybacked on the Rosetta satellite since leaving Earth, but detached and began its descent to 67P/C-G on Nov. 12 at 3:34 a.m. EST. Touchdown was confirmed at the Space Operations Centre in Darmstadt, Germany at 11:03 a.m., but was followed by a malfunction warning. Philae was meant to fire two harpoons into the comet’s surface to prevent it from drifting away due to 67P/C-G’s extremely weak gravity, but for an as yet undetermined reason has failed to do so. The lander rebounded off the comet’s surface for a nail-biting ten hours and landed another two times, about one kilometer away from its intended landing site, settling by 5:32 p.m.

The landing was performed completely autonomously, as it takes commands from mission control 28 minutes to reach the comet, which is presently situated between Mars and Jupiter.

Philae appears to have landed next to a jagged cliff, and is in a precarious position with one of its three legs possibly off the ground. Rosetta has been imaging the comet from orbit in attempt to find the lander, but mission control has yet to locate where it is on the comet.

Philae completed its landing and preliminary communication on battery power, and was meant to switch to solar power for its next stage of experimentation. Its final landing site appears to be preventing full exposure to the sun, however, which forced ESA operators to conduct their experiments before Philae’s battery ran out.

Philae ran out of power and lost communication with mission control on Nov. 14 at 7:36 p.m., 57 hours after landing. Before doing so, it successfully ran five of its experiments and sent their data back to Earth, which are currently under analysis.

As the comet nears the sun until August 2015, Philae may receive enough solar energy to be revived. Until then it will be in hibernation, and will hopefully remain attached to 67P/C-G’s surface.

Comets are amalgams of ice, frozen gases, rocks, and dust that remain virtually unchanged from the formation of the solar system 4.5 billion years ago, and so this study may offer a glimpse into its birth. The origins of Earth’s water are also uncertain, but icy comets may have brought some or all of it to our planet.

In 2006, NASA’s Stardust mission found the amino acid Glycine, a common building block of cells, in a comet’s tail, suggesting that comets may be the source of complex molecules that kick-started life on this planet.

Just hours before losing power, Philae successfully drilled 25 centimeters into 67P/C-G’s surface, successfully extracting and analyzing its internal composition. Data are being analyzed and ESA scientists hope these findings will help explain how and why the sun, planets, and other heavenly bodies formed, and whether comets truly may be life-on-Earth’s progenitor. Currently, the results have yielded unidentified organic molecules which may help us answer these questions.