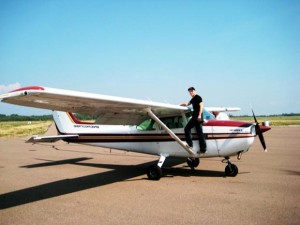 Corey Mesh is a fourth-year aviation student completing an honours project in computer science. His research, which involves investigating electronic flight information systems, allows him to equally integrate his two fields of study.

Mesh’s thesis is entitled “What am I looking at?: Data visualization of electronic flight information systems.” The research for his project involves interviewing a selection of pilots from across the country, which includes military personnel, commercial airline pilots, and flight instructors. Mesh does this by sending them a questionnaire. The questionnaire asks questions pertaining to their information flight systems, such as what makes them good, and what could be improved upon. Mesh plans to conduct followup interviews as well, in order to get more in-depth answers.

“This was the perfect way to combine my two majors,” said Mesh.

In addition to the questionnaire and interviews, Mesh is conducting a literature review of how past and present flight information systems have been designing. He is also looking at how modern technological advances could be applied in order to design new, safer, more efficient systems.

Mesh is working with mathematics and computer science professor Robert Rosebrugh, who is the head of the aviation program at Mount Allison. Mesh’s research interests lie in human-computer interaction, which is a subfield of his thesis. According to Mesh, Rosebrugh was the “natural guy to go to,” due to his knowledge, and being an experienced pilot himself.

The aviation program at Mt. A, which involves collaboration with the Moncton Flight College, has been growing since its inception. Those who graduate with a bachelor of science in aviation will receive a commercial pilot license, a multi-engine class rating, and a Group 1 instrument rating. Mesh, who has been flying for many years, already has his glider pilot license, private pilot license, and his night rating (which involves flying at night time).

If his thesis turns out promising, Mesh plans to take a masters program in computer science, specializing in human-computer interaction. Using his knowledge, he hopes to one day design new information systems.

“As a pilot and a programmer, I know both sides of the system,” said Mesh.