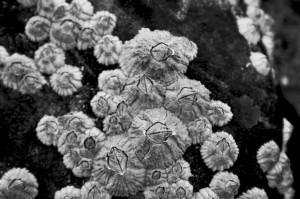 Elise Tessier is a fourth-year biology honours student. She is currently conducting research under the supervision of Ron Aiken on Balanus balanus, a species of acorn barnacle found in the St. Andrew’s region of New Brunswick.

B. balanus are hermaphroditic crustaceans, meaning they contain both male and female reproductive organs. B. balanus have a limited space in which they can reproduce, as they are cemented to a substrate for most of their adult lifespan. Tessier’s research focuses on the thickness of their shells—B. balanus shells typically possess six overlapping plates and two sets of opercular plates to protect their opening. Plate thickness is due to the accumulation of calcite crystals, which builds up on account of the tides. Determining plate thickness is important, as a thicker shell results in an increase in strength and resistance, and shells are essential in prevention from desiccating, for protection from predators, and for feeding.

Her thesis is entitled “Energetic cost in Balanus balanus shell production with respect to location and seasonal dynamics.” Tessier collects samples at Pagan Point in St. Andrew’s, New Brunswick. She began collecting in October, and will continue to collect samples until March. Each month, Tessier collects thirty barnacles: ten from the centre of an aggregation, ten from the edge of an aggregation, and ten that are isolated (are cemented at least five centimetres away from other barnacles).

Tessier hypothesizes that less energy will be used towards shell production in barnacles within an aggregation than those who are isolated. She also hypothesizes that barnacle shells within the aggregation will be thinner than the shells of barnacles on the edge, due to the added protection from a group. From her research, Tessier aims to understand what influences calcification of B. balanus shells, and how animals such as B. balanus may alter their energy allocation in different microhabitats.

All throughout high school, Tessier conducted research in labs, as well as competed in national science fairs.

“This experience made me gear towards biology,” said Tessier. “Mount Allison appealed to me because it’s a small town, and I’m from a small town too.”

During her undergraduate career, Tessier had an opportunity to complete two minors, as well studying abroad.

“Doing all of this plus having the opportunity to do research is something I would never be able to do if I have attended a larger school,” Tessier says.