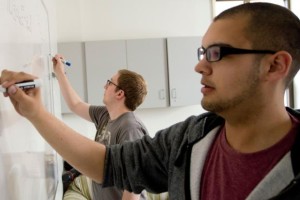 Students use microtron to gather data for their honours thesis.

Physics research has taken two students from Mount Allison to Germany and back. Jeremy Crowe and Ryan Baker are fourth-year physics honours students working under the supervision of Mt. A physicist David Hornidge.

Their projects focuses on  utilizing data collected from the Mainz Microtron (MAMI) at the Nuclear Physics Institute of Johannes Gutenberg University in Mainz, Germany. The device, consisting of an electron gun and a series of magnets, adds energy to the electrons which  causes the electrons to accelerate.

Crowe’s thesis is titled “The Proton Detection Efficiency of the Crystal Call and Two Armed Photon Spectrometer.” The proton detection efficiency is a measure of how often a proton may miss detection under certain conditions. These conditions include the angle and energy of the recoil proton,  as well as the energy of the incident beam.

Baker’s thesis, “Investigating the Crystal Ball Detector and Energy Calibrations,” is concerned with the calibration of the Crystal Ball detector. The process involves coding and testing new software that could be used for data analysis from old software.

“One of the problems with protons is that they are eager to interact with other matter. Protons are tricky when it comes to detection compared to photons or particles that decay into photons,” said Crowe.

“Since a proton is charged, there are more things that could happen to it on its way to the target. It is what adds to the complexity of it,” said Baker.

The experiment involves a stationary target and a flux of photons coming from the electron beam that interacts with the target using an electromagnetic field. Two main detectors, the Crystal Ball (CB) and Two-Armed Photo Spectrometer (TAPS), are used to capture these events.

The Crystal Ball detector is a big sphere with two entry points on both ends. When energy is received, the detector flashes off and induces a signal. The Two-Arm Photo Spectrometer is used to catch forward scattered particles. Liquid hydrogen is used to approximate photons that reach the target located inside the detectors.

Hornidge’s group as a whole is concerned with scatter polarizing and spring polarizing abilities, which are the constant charges or masses that determine the internal properties of the protons.

A proton, as a central piece of matter of an atom, is not technically the most fundamental particle because it is composed of smaller particles called quarks. Hornidge’s group collectively requires data that determines what the internal constants should be and how they line up given different theoretical models.

The two projects are tangential in determining proton efficiency for proper data analysis.

“Pure physics research has no idea about building a faster computer in the end. It is a way to better our understanding of internal structure and behaviours of photons,” said Baker.

“The experiments have no direct applications, but it is a meeting ground between experiment and theory,” said Crowe.

Crowe and Baker hope that the data they have gathered can be further expanded by future members of the group.

“We have been really fortunate to work and travel with David Hornidge. He is around whenever to help,” said Baker.

“He is a very approachable person. He is really down to earth. It is really fun doing research with him. He is more a friend than a boss,” said Crowe.

Baker will be joining the Experimental High Energy Physics Research Group at the University of Toronto.

Crowe’s plan is to attend Dalhousie University and to continue to carry out his project in Germany with Hornidge.