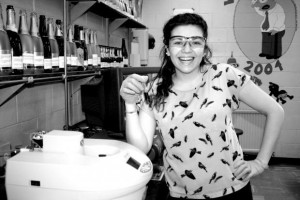 Maria Wilson is a fourth-year chemistry honours student working with Steve Westcott. Her thesis is entitled “Synthesis and anti-tuberculosis properties of copper hydroxypyridinones.”

Due to the increased resistance, the pressure is on to develop new drugs to combat tuberculosis, and to decrease the length of treatment regimens (it often takes several months). Research has shown that current tuberculosis drug activity is increased when combined with metal, with copper being especially useful.

Copper has been known to have antimicrobial properties for centuries. Nowadays, researchers have been coordinating new drugs to copper, as well as current ones, in order to increase their activity.  Wilson has been using maltol (a naturally occurring organic compound) and amine compounds to make ligands for copper. She is doing this in hopes of testing them against tuberculosis strains later in the term.

In order to synthesize ligands, Wilson has been using a technique called microwave synthesis. This method involves using a vessel to put reactions in, which is then subjected to microwave irridation. The advantages of this method include a quicker reaction time, using less solvent, and producing more yields. Microwave synthesis also allows for some reactions to occur that typically wouldn’t under regular conditions.

Wilson is currently in the synthesis phase of her research. Thus far, she has created the maltol control, and is working on synthesizing new copper ligand compounds for tuberculosis testing.

Wilson chose to study chemistry after being interested in the subject in high school, though it was the research aspect of the program that appealed to her the most.

“When I first came to [Mount Allison], I was interested in problem solving, and real life applications,” Wilson said. “Research is a lot of hard work, but it’s really rewarding.”

After completion of her undergraduate degree, Wilson hopes to complete her master’s in a health related field. She has applied to programs in both health promotion amd community health and epidemiology.