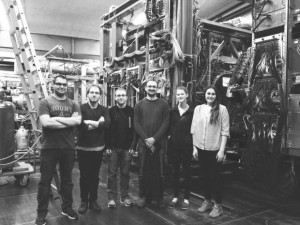 Every summer, a select number of Mount Allison students get to travel to Mainz, Germany to work in the world’s largest electron accelerator. The Physics Department’s David Hornidge takes his honours students to the Mainz Microtron (MaMi) at Johannes Gutenberg University to study how the basal forces of nature affect subatomic particles.

“We’re trying to discover what’s going on at the heart of matter,” said Hornidge.

Spin polarizability is a property inherent to subatomic particles, analogous to charge. Understanding the fundamental properties of particles will help us understand their interactions. The study of spin polarizability will help us understand the Strong Nuclear Force. The lab hopes to learn more about how the Strong Nuclear Force works through this research.

“We’ve got electrons essentially going at the speed of light,” said Ryan Baker, one of the lab’s honours students. “We turn the electrons into photons, or little bits of light, and shoot that at a stationary target, something with a lot of protons. What we’re aiming to do is have an interaction between this light and a proton. We take all this with the goal of measuring spin polarizability.”

Four honours students work with professor Hornidge this year. Two of them, Ryan Baker and Hannah Stegen, spent their summer in Mainz working on software the facility uses to detect particle interactions. Baker’s project was on calibrating a new version of this software to the facility’s hardware, and Stegen’s project was on making it able to detect problems during an experiment.

“In the past, data weren’t analyzed until after experiments were run,” Stegen said, “so if there were any detector problems, you wouldn’t realize until too late.”

“We run our experiments 24/7, two or three weeks in a row,” said Hornidge. “If you have a problem and let it run for a week and the data’s useless, you’ve wasted hundreds of thousands of dollars.”

Meg Morris also did her honours research this summer, preparing a sample for an upcoming experiment on how photons interact with neutrons.

“At Mainz, they’ve been running experiments on the proton. […] The proton is fairly easy to work with,” said Morris, “but the neutron is fairly unstable, and that presents a lot of challenges. Experiments have been run for the neutron, but the results sucked.”

Morris spent the summer preparing a target made of Helium 3 and Helium 4 isotopes, which are rich in neutrons, for an experiment to be run at MaMi next year, in which she said she hopes to be involved.

Hornidge said that his research doesn’t have specific technological applications, but is important to our understanding of nature.

“It’s pure fundamental research,” he said. “We’re not trying to build a better toaster. Everything we do, there’s always spinoffs.”

“Pure research is amazing in that you inevitably end up finding things you didn’t expect … no one said ‘go find quantum mechanics, or come up with general relativity.’ It was pure research, and pure research is really important,” said Hornidge.

He also said that a better understanding of the Strong Nuclear Force could aid in developing nuclear fusion, a highly sought-after sustainable energy goal.