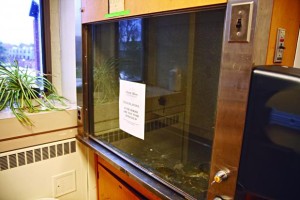 Correction: The original headline of this article was inaccurate, and has been updated. As the article states, Robert Ireland resigned his position as the head of the Department of Biology at Mount Allison because the university has not made progress on necessary repairs to the ventilation in the Flemington building. The error was made by editorial staff, and does not reflect on the piece’s author, Clay Steell.

On behalf of The Argosy, I extend my apologies to Dr. Ireland and Mr. Steell.

He’s headed the biology department for five years, but on April 2, Robert Ireland resigned from his position, citing the university’s decision not to repair ventilation systems in the Flemington building in time for the next school year.

“For many years we’ve been promised that we would get ventilation in this building,” Ireland said. “The provost and dean [of science] assured us come September 2014 we’d have at least one lab ventilated.” But on March 31, Ireland was informed in an email from science dean Jeff Ollerhead that there was “a zero per cent chance” that Flemington would receive adequate ventilation in the coming year, with Ollerhead adding, “I am as frustrated as anyone else, but this is the reality.”

Ireland, who has been a professor at Mount Allison since 1992, said after receiving the email, “enough is enough, I resigned.”

In his official resignation letter, Ireland stated that “since the university declines to address basic health and safety problems pertaining to our students and staff, I can no longer execute my duties as head of the Biology Department as required by the collective agreement (clause 18.12.2) as such I resign my position as head immediately.”

“I can’t in good conscience do this to the students and the faculty, I can’t be party to another patchwork solution to something completely avoidable if only the administration would stand up and do it,” he added.

“It wasn’t my intention to do something [disruptive] with this, I did it because I don’t think I can do my job properly under the circumstances,” he said, “perhaps this will indicate the amount of importance we attach to this issue, but I think that was already understood. It would be sad if one had to resign to make it clear that health and safety are important.”

Ireland is not the only one who is concerned.

Many biology students are familiar with the Flemington Building’s lack of ventilation, which is necessary for animal dissections and etherizing fruit flies in genetics classes. In November, The Argosy reported that several biology professors also need ventilation for their research.

“Some of our most hazardous labs have moved to the biochemistry lab space in Barclay, an inconvenient contingency that was supposed to be temporary, two years ago. The department worries that this supposedly stop-gap measure will become permanent and our labs will forever be housed in the Barclay building, in unsuitable facilities shared with biochemistry. The administration continues to exclude the entire biology department from what they are really planning. This pattern of secrecy does not reassure anyone in the least. Apparently the administrators know what is best and will let faculty and staff know what is happening when they feel like it. Some Mount Allison family!” read an email from a source whose work is affected by the improper ventilation. The source requested anonymity in concern for their livelihood.

“The final blow came last fall when all of our fume hoods were condemned,”  continued the email. “It is hard to measure dollars against cost in human health. And, we have had plenty of that.”

“We’ve had three cancers in biology; it doesn’t mean causation of course, but people are concerned,” said Ireland.

Crandall Engineering did an external report on Flemington’s ventilation system last year. According to the report, “exhaust ducts through the core of the building appear to be leaking.”

The firm estimated that it would cost the university $300,000 to install adequate ventilation in Flemington’s room 213, enough to support fall and winter lab sections.

“It’s just one lab,” Ireland said, “the entire Barclay building’s ventilation was done in a year, and their saying they couldn’t do one lab in five months is silly.”

Ireland was uncertain why the construction project was not going forward as planned. “We’ve been told over and over again the money’s there, that it’s going to happen, and now it’s not going to happen.” According to Ireland, Ollerhead in his email “implied that there was some disagreement at a senior level” without providing any details. Ireland said Ollerhead emailed him again the next day, saying “the rationale is simple, Facilities Management cannot consult, design, tenure, or build a ventilation system for Flemington 213 to be ready in the fall of 2014.”

Rob MacCormack, the head of Facilities Management, and David Stewart, the vice-president responsible for facilities, both declined to comment on the situation.

Ollerhead also believes there is a problem, but wouldn’t say whether money was available for the renovations.

“Improving ventilation in the Flemington Building is a priority for me. Some of the proposed solutions are complex and require significant lead times to implement. It is therefore likely that some work will be done during the summer of 2014 while other work will have to wait until the summer of 2015 and/or different solutions employed to address the ventilation issues identified by the University’s consultants,” Ollerhead told The Argosy.

“In terms of funding, no decision… has been made as of this date. The University is still developing a budget for 2014-2015. This said, I am confident that funds will be allocated to improve ventilation in the Flemington Building once solutions are selected,” Ollerhead added

Karen Grant, Mt. A’s Provost, told The Argosy in an email that “[n]ecessary work on the Flemington Building will begin later this spring,” but declined to comment further, referring inquiries to what she called Ollerhead’s “comprehensive” comments.

Ireland cited Flemington’s lack of ventilation as a problem for the biology department’s growing enrolment, which has doubled over the last fifteen years. “Students have moved into the life sciences,” he said, “Pre-health is becoming more popular. We’d like to run a human anatomy course, the sort of course that needs basic facilities with adequate ventilation.”

He was critical of the university’s capacity to plan in this regard. “The University Planning Committee isn’t a planning committee, it’s a knee-jerk response committee,” he said, “it seems to respond to problems instead of long-term planning. We’ve had more five-year plans than that space should allow. Mount Allison tends not to take direction, we tend to drift.”

“The university needs to make some decisions: if we allow it, we need to increase the resources in that area, or we cap enrolments. Biology’s not getting the attention we need, certainly compared with other departments.”

Ireland proposed a long-term alternative to the ventilation issue: a new academic building for the life sciences. “There’s a good case to be made for planning a new building,” he said, adding that the university should, “plan it now, for ten years from now. I won’t see it, but our new faculty and new waves of students will see it.” He compared it to the new Purdy Crawford Centre for the Performing Arts, saying “it serves a need for some specialist programs. Let’s see if we can find the external sources for a life sciences building, which we know is going to attract a lot of students.”

Ireland hopes that his resignation will not negatively affect the biology department’s faculty, staff, or students. In the meantime, Ollerhead has assumed all department head responsibilities, and has offered Ireland’s position to faculty members. None have yet offered to do so. Ireland made clear that he “was not trying to be disruptive. I’ve done all the things I could, signed all the forms, got the job ads organized. I will provide whatever support I can to my replacement.” The department head position opens up July 1, and its occupancy is not yet determined.

Ireland plans on maintaining his normal teaching and research schedule. “I’m going to spend my time and energy on doing things more useful: working for students.”