Mt. A alumni give advice to science students 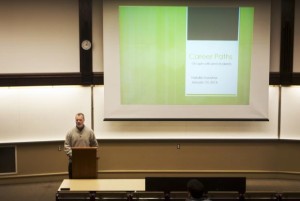 Students come to learn about careers in science.

Over sixty students gathered in the Wu Centre for an instalment of the Career Exploration for Science Students series last Friday. The event focused on a burning question of university seniors the world over: What do I do next? In an effort to answer this question, the faculty of science invited several graduates, all currently employed outside of academia, to come and give talks about the decisions they’d made along their career paths.

The event was opened by Dean of Science Jeff Ollerhead, who then passed the floor to Natalie Donaher, a research associate with the Mount Allison Biochemistry Department. Graduating with honours in biochemistry in 2006, Donaher completed her M.Sc. at Dalhousie, before returning to work at Mt. A in 2009. Although she loved being part of the academic community, the lifestyle (or lack thereof) of a Ph.D. researcher had less appeal to her.

“I now have the best work/life balance of anyone I know,” she says. Travelling frequently, Donaher attends international conferences as part of her job. Her recommendation for students placing themselves in the sciences was to read a blog from someone in the field, and to use self-assessment tools to try and determine their aptitudes.

Next up was Richard Isenor, another biochemistry graduate (1989), who is now manager of the NSERC Atlantic Regional Office. With a master’s in environmental studies from Dalhousie and a Ph.D. in science and technology policy studies from the University of Sussex, Isenor’s multidisciplinary education has led him “from science to social science and back again.” After getting his doctorate, Isenor served the government in a number of positions, including working in the Northwest Territories and the Privy Council Office.

Looking back, Isenor reflected that while many of his career moves were by his own determination, many were also his own ability to capitalize on happenstance. He acknowledged that Mt. A had given him an uncanny set of skills at an undergraduate level, with unparalleled research opportunities and close contact with his professors. He has no major regrets from his path, “but I do wish I’d stuck with French,” he admitted.

Nic McLellan, a conservation programs specialist with Ducks Unlimited, was unable to make it, but was replaced by Ollerhead, who spoke about the consideration necessary to start your own business. “Consider taking a minor in commerce,” he says, noting the advantages of a diverse liberal arts education.

Katrina Hitchman (psychology, 2002) is now a manager of knowledge mobilization and training for the Canadian Water Network. Her tips for students are to spend time with key mentors, keep your options open, and build on the opportunities that come your way.

Jenni Horsfall (biology, 2006), now a pharmacist at Jean Coutu in Sackville, took a gap year before pursuing pharmacy, saying that more than anything, Mt. A gave her a strong work ethic and considerable experience, including good references.

Moira Peters (physics, 2003), a sommelier and wine educator, who runs the Halifax-based Unwined Tasting Parties, was the final speaker in the series. An entrepreneur and self-professed “wine nerd,” Peters was able to give a lecture about the science of wine-making and discuss the finer points of chasing one’s passion, both while giving the audience a lesson in how to judge a wine.

The session provided students with a lot of information, and a lot to mull over. Perhaps the most important thing to take away from it all is that no matter where you want to go, there is someone out there who can help. The university keeps tabs on their alumni, and can suggest someone who might be able to give you the advice that you’re looking for.

Keegan Smith is a master’s student in biology  at Mount Allison.