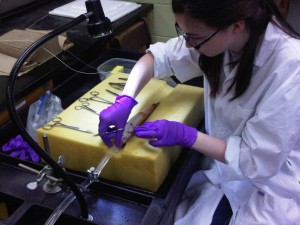 Mount Allison biochemistry professor Tyson MacCormack has received research funding from the Canadian Foundation for Innovation (CFI) for a new study he is leading on potential toxic impacts of nanoparticles on aquatic ecosystems.

First described scientifically by Michael Faraday in 1857, nanomaterials are widely used in an emerging manufacturing sector. A nanoparticle is defined as any object with at least one dimension of less than one hundred nanometers.

“Nanoparticles are now being released into the environment in significant quantities, and have unique properties compared to chemicals traditionally used in consumer products,” says MacCormack. “We are hoping to test for nanomaterial toxicity in fish, determine what nanoparticle characteristics lead to these effects, and what it means for our aquatic environments.”

Research on nanoparticle environmental impact is limited—something MacCormack’s team hopes to change. In particular, their CFI funding will be used to acquire an instrument to characterize nanoparticles produced and studied in the lab. The instrument will allow researchers to examine the reflectance patterns of a nanoparticle suspension in order to determine the stability and behaviour of the materials.

Once the particles are characterized, they will then be tested on fish in a swim-tunnel respirometer—a device used to assess the metabolic activity of the fish, and monitor changes that could indicate a potential toxic reaction. The ultimate goal is to connect biological effects with molecular structures in order to predict a nanoparticle’s impact.

“The idea is to find a set of general properties, and then provide this to industry,” says MacCormack. “They can say, ‘If we change the shape from this to this, the toxicity will decrease, but we’ll retain these important properties.’”

One key difficulty is disentangling complex systems, inherent to both the natural environment, where a variety of toxins may interact, and the chemistry of the nanoparticles themselves.

“In general, the impacts are quite complicated, mainly due to the complex nature of the structure of nanoparticles,” says Peng Zhang, whose group is studying the structure and biomedical properties of noble metal nanoparticles at Dalhousie University.

“For instance, the biomedical activities of metal nanoparticles sometimes were found to be sensitive to the size, shape, and composition of the particles. In order to thoroughly understand these impacts, it is important to understand the structure of nanoparticles at atomic level and then correlate such structural information with their biomedical performance.”

MacCormack’s group is hoping to do just that, because for all their potential impacts, nanoparticles also hold considerable promise. Advancements in fuel efficiency, water filtration, and drug efficacy are all examples of ways in which nanoparticle research has already begun to improve our society.

“The idea isn’t to slow down industry,” says MacCormack, “Just to make sure that things happen responsibly.”