Mt. A professors field questions on the internet 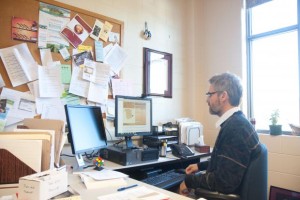 Dr. Mario Levesque of the Politics and International Relations Department and Dr. Craig Brett of the Economics Department participated in two hour-long “Ask Me Anything” sessions last Thursday and Friday.

Levesque’s AMA covered the politics of New Brunswick’s provincial election. Topics ranged from the different parties’ stances on shale gas development to the proposed changes to provincial tax policy. Brett’s AMA focused on New Brunswick’s budget and its relation to party tax platforms, as well as other fiscal topics.

“I think it went pretty well,” said Brett. “I was very pleased with the questions. Hopefully, people who took part in the session either learned something or had the chance to think about something in a different way than they did before.”

Both professors said they valued the experience, and they saw it a means of reaching new audiences.

“If you want to get a message out, you have to use multiple media,” said Brett, “you can’t just rely on print or radio anymore … media is segmented. There are broad swaths of the population that watch TV; there are others who use online media as their primary source of online information.”

Brett and Levesque said they were aware of at least one Mt. A student who participated in the AMAs, but most of the questions seemed to be from New Brunswick residents. They said the questions and discussions were interesting, and they enjoyed the experience. “People referenced books and studies in their questions, so [they] knew what was going on in terms of the election and provincial books,” said Brett.

The professors said that the process of conducting an AMA was different than their past experiences. Levesque said it reminded him of receiving emails or letters from interested parties while doing academic research, but at a much faster rate. “It’s different than doing an op-ed piece,” said Brett. “At minimum it takes a couple hours. That seems like a long time compared to answering a question as soon as it comes in these AMAs. It’s an intense thing.”

Levesque said his AMA inspired him to use more online media in his future classes. He saw potential for what he described as online office hours, a specific time of day during which he would be online  solely to answer students’ questions. He says he wouldn’t use Reddit itself, but a similar structure to its message board.

Brett said that academics in particular could make a positive public impact by conducting AMAs or other similar online activities. “I’m in the business of figuring stuff out and explaining it to other people; that’s what academics do,” he said. “The more platforms I use, the more people I get to explain stuff to and that’s good.”

Commenting on Reddit’s moderated nature, Brett also said that “at least with Reddit, in many ways it’s better than some of the other traditional ways that academics might interact with the media; it has less risks and pitfalls.”

The AMAs were organized by Mt. A student Brian Laurejis.