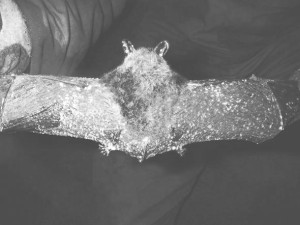 A new study done by researchers from the New Brunswick Museum suggests that New Brunswick’s overwintering bat populations are falling victim to a deadly fungus,  and may soon disappear from the province altogether. Bats are well-known icons of Halloween, vampires, and other nightly terrors, but they are also important both to local ecosystems and human pest control. Therefore, this study is alarming to the future of New Brunswick ecosystems.

Bats across North America have been falling victim to fungal White Nose Syndrome (WNS) when the disease was discovered in New York State in 2006. The fungus infects bats’ skin and soft tissue, particularly on their nose. The disease’s origins are a mystery, but it may have been carried by humans from Europe, where we see the bats in Europe have become genetically resistant.

WNS disturbs bats during their overwinter hibernation, causing them to fly out of their roosts and expend the energy they need to survive the winter. WNS has a 90 to 100 per cent mortality rate, and the Canadian Wildlife Health Cooperative estimates that the fungus has killed more than 5 million bats across temperate North America.

The most recent survey of bat populations in New Brunswick showed disturbing results. Ninety-nine per cent of the province’s formerly most common bat, the Little Brown Bat, have been dying off since 2011; only 22 remained alive in New Brunswick as of this spring. The other two most common species in the province, the Northern Long-eared Bat and the Tri-colored Bat, have seen similar declines in the wake of WNS.

The disease’s first documented occurrence in New Brunswick was in 2011 at a cave in Albert County. It has since spread across southern New Brunswick in caves near St. John, Sussex, and Moncton.

Since its discovery, WNS has spread to 17 U.S. states, Ontario, Quebec, New Brunswick, Prince Edward Island, and Nova Scotia. It has been spreading westward in Ontario since its arrival in 2010, and researchers at the University of Winnipeg are monitoring for its anticipated arrival in Manitoba. The Canadian Wildlife Health Cooperative says the disease might infect all bats in the country in twelve to eighteen years.

The three bat species affected by WNS in New Brunswick are currently listed as species-at-risk by the federal government, and the Committee on the Status of Endangered Wildlife in Canada recommends that they be listed as an endangered species.

Bats play a key role in their ecosystems by controlling insect populations, including human pests. The United States Forest Service estimates that 2.4 million pounds of insects will go uneaten across North America this year as a result of WNS. As it is a recent phenomenon, the full effect of WNS on human activity is unknown.

While the bat species affected by WNS are the most abundant in New Brunswick, some migratory species like the Hoary Bat and Red Bat do not overwinter in the province, making them unsusceptible.

Seeing bats flying or stranded outside during the winter is a sign that they are infected with White Nose Syndrome. The Government of New Brunswick advises residents of the province to call the Department of Natural Resources if they see bats flying or on the ground this winter, as this information can aid researchers in understanding the disease.