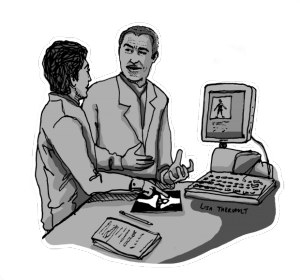 The anterolateral ligament shapes the way we view anatomy.

About 150 years ago, a surgeon in Paris found a new body part while dissecting a cadaver. He described the found structure as a ‘fibrous band’ on the outside of the base of the knee.

Since the discovery, no one has given it much thought. Not until the 1970s has the band of tissue been discussed again, when it reappeared in medical literature. The fibrous band was given many names, but no one could really pinpoint what it was or even what bones it connected. That is, until now.

Two orthopedic surgeons from Belgium have finally located the enigmatic structure, and confirmed what the Parisian surgeon claimed 150 years prior—there is an overlooked ligament in the knee, and it might be important.

The structure, called the anterolateral ligament (ALL), is about the length of a small thumb. The ALL sits toward the front and side of the knee, and connects the thighbone to the shinbone on the outside of the leg. Its purpose is to keep the knee from rotating inward, researchers suggest.

Steven Claes and Johan Bellemans dissected the knees of forty-one cadavers, and reported that they found the ALL in forty, or ninety-seven per cent, of them.

The surgeons claim that their findings can help explain why those who have treated an ACL injury still have issues, specifically experiencing ‘pivot shifts’ which cause the knee to give way. Bellemans, who is the lead surgeon on this study, claims that about eighty per cent of his patients with ACL tears also have an injury in the ALL. Over the past few years, he and his team have been repairing the ALL when they fix an ACL tear as well, but it’s too soon to tell whether this extra treatment raises the success rate.

“The precise anatomical knowledge of this enigmatic structure delivered by this study could be highly relevant for clinical practice,” the surgeons say in an article published in the Journal of Anatomy. “However, further research is needed to establish the function of the ALL and to determine its role in clinical knee injuries.”

Doctors have overlooked this ligament for decades, and Bellemans claims that it’s because it is difficult to find.

“If you ask even the most experienced surgeon to look for the ALL, they wouldn’t find it. It’s in an area that we don’t usually see during surgery,” Bellemans says.

Amazingly, this is the second body part to be discovered this year. Scientists have discovered a sixth layer in the eye’s cornea. This layer, which is only fifteen microns thick, can lead to eye complications if torn.

These discoveries lead us to ask: in our modern age of imaging and other advanced medical technologies, how is it possible that there are still things to learn about our anatomy?

Researchers say that holes continue to exist in our knowledge because we are enormously complex creatures—the variation from one person to the next is vast. Three per cent of studied cadavers do not possess an ALL. It leads one to think about the unknown structures that could lie beneath our skin.