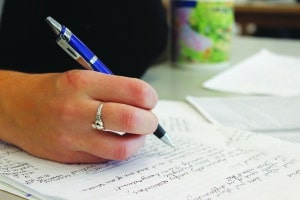 “First I get sweaty, then I get kind of excited. There’s a come-up phase where you kind of feel it,” said Ted (pseudonym). “You start reading, you look at the clock and it’s two hours later, and you’ve done 200 pages.”

Ted is a Mount Allison student, and is among a growing number of university students worldwide who use focus-enhancing stimulants like Adderall, Ritalin, Concerta or Vyvanse without a prescription to help them study. These drugs are usually prescribed to treat conditions like Attention Deficit Disorder (ADD) or Attention Deficit Hyperactivity Disorder (ADHD), but students without these conditions who take them say the drugs sharpen focus and allow them to study or work for much longer periods of time than normal.

Ted said he uses these drugs once or twice per week, on average, but sometimes more frequently before midterms or exams. He may be able to work for upward of 12 hours straight after using, depending what kind of drug he takes and its dosage. He added that he doesn’t necessarily take it do better academically, but to do the same amount of work in a shorter period of time.

While Ted takes the drugs with some regularity, he may be among the more moderate users at Mt. A.

“It’s always available when I have expendable money. It’s like an everyday, once-a-day [habit] in the morning,” said Chris (pseudonym), a Mt. A student who uses the drugs non-prescribed

Chris says he’ll take these drugs every day for weeks at a time, sometimes spending up to $70 per week on them.

“I have a passion for things that I feel is taken away when I’m lazy,” said Chris. “That passion is subdued by fatigue and mental exhaustion that I can reignite and take full advantage of when I use something like Adderall or Vyvance, and it just seems perfect for a student.”

Chris said he’s aware of the danger of addiction posed by using these drugs so regularly, and makes himself go on several-week-long “tolerance breaks” throughout the term. His productivity goes down, but he says he does it because he wants to go to graduate school and is concerned about relying on the drugs by then.

Chris and Ted said they buy study-enhancing drugs from friends with prescriptions and that more serious dealers of these drugs are rare in Sackville. Ted said single pills range from $3 to $10 each, depending on which type of drug they are and whether they have short or long release times, with long-release Adderall usually fetching the highest prices. Both said they started using in high school and that these drugs are commonly used in Mt. A’s residences.

“If you can’t find it in res., it’s probably because you put no effort in or you don’t have any friends,” said Ted. “It’s very easy to find. Not everyone does it, but it’s definitely there.”

Ted added that many students in residence don’t stop at popping study pills. Some crush up drugs like Adderall or Concerta and snort them, which he described as a “shitty experience all around.”

Jane (pseudonym) is another Mt. A student who has used these drugs to help her study. She was recently diagnosed with ADHD and now takes Vyvance on prescription, which she said makes her study and feel normally, but she took study-enhancing drugs before her diagnosis to help her focus. She now sells surplus pills from her prescription, which she gets both by requesting higher dosages from her physician and by not using the medication over breaks.

“I think more people than you would expect have tried it, or wanted it,” said Jane.

Jane, Chris and Ted all agreed that non-prescribed study drugs are widely used at Mt. A. Ted estimated up to 20 per cent of students have tried or use them regularly, Jane estimated 30 per cent of students take them with some regularity, and Chris said that a “huge majority” have tried them but that fewer use regularly. Chris added that he thinks university culture makes students who wouldn’t usually do drugs try them, as substance experimentation and abuse is normalized in universities.

“The use is so rampant because someone can say, ‘Yeah, I can do Adderall,’ without fearing serious social repercussions being a college student,” said Chris.

Relatively little is known about how widely these drugs are used in Canadian universities, but these estimations are in line with some past research. A 2011 editorial from the Canadian Medical Association Journal said 5 to 35 per cent of university students may use non-prescribed study drugs, while the 2013 National College Health Assessment Survey found 3.7 per cent of Canadian post-secondary students reported using the drugs. Other student newspapers across Canada have also reported widespread drug use for academic purposes, such as student newspapers from the University of British Columbia, University of Toronto, McGill and Dalhousie.

According to Adam Christie, Mt. A’s manager of international affairs and acting head of student life, the university doesn’t have any information on how common this drug use is at Mt. A.

“This is the first time it’s come up on my radar,” said Christie. “It’s obviously a concern.”

Using non-prescribed study drugs may also carry some medical risk. According to Cindy Crossman, nurse-educator for the Wellness Centre, taking any drug without a prescription could cause allergic reactions, amplify adverse side effects associated with that drug, or become dangerous when mixed with other drugs or alcohol. Some stimulants in particular, such as Adderall, may become dangerous at higher dosages, leading to risk of heart complications and even death. Snorting these drugs when crushed up may increase these risks, as it shortens their release time and changes how they become distributed around the body as well. Crossman said she recommends against taking any drug without a prescription.

Christie said he would sooner educate students and encourage them not to use study-enhancing drugs than to legislate against them.

“I’m more interested in knowing the root cause. Why are students feeling like this is an option for them, or even a necessity? Is it a workload issue […] is it pressure on wanting to maintain a certain GPA? A certain scholarship?” said Christie.

Lily (pseudonym) takes non-prescribed study-enhancing drugs a few times per term, usually around exams and important assignments. She said she takes them mainly because there’s not enough time for her to study while being an involved student, and that other high-achieving students she knows take them as well.

“We’re kind of expected, as students, to not only excel in [our] classes but do 100 other things at the same time,” said Lily. “I think that’s what it comes down to: time management. It’s ‘How do I do well in all my classes plus the five extracurriculars I’m doing and then the thing I volunteer for then this other thing I said I’d do?’ So I think it’s very high expectations across the board.”

The Argosy gave the students interviewed in this article pseudonyms to protect their identities and privacy, given the illicit nature of these drugs.