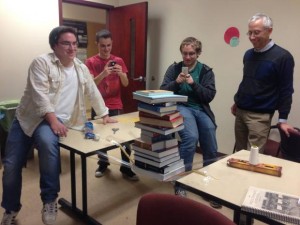 This past week was physics week here at Mt. A, and physicists and science enthusiasts alike came out to attend the many events put on by the Mount Allison Physics Society.

The first event that took place on Monday was a departmental open house, which took place in the Dunn Building. The open house featured professors giving information about the physics program, including valuable knowledge about upper year courses. Lab instructor Cathy Pettipas was on hand to give demos and lab tours for those interested.

The next day followed with a meet-the-prof potluck at 16 Allison. Many physics professors attended and mingled with the upper-year physics students who attended.

“We wanted people to interact with professors outside of office hours and the classroom,” Physics Society Vice-President Academic Allison Sibley said. “By having events like this, students hesitate less when they go to see them for problems.”

The most unique event of the week was on Wednesday, which featured a bridge building contest. Six teams of two persons assembled to build bridges out of spaghetti, tape, and string. Using his extensive knowledge of physics, professor Ralf Bruning and his son won the competition—his bridge was able to withstand the weight of sixteen textbooks. The bridge only broke after his son sat on it.

Thursday night followed with a movie night—a showing of the Oscar-nominated movie Gravity.

“Attendance was sparse, but everyone that attended seemed to have a good time,” said Sibley. “We wanted to watch something that was science related, but was still a good movie. Plus, it’s fun to point out any scientific inaccuracies.”

The week closed off with a wine and cheese night, also taken place at 16 Allison.

“The turnout was fantastic,” Sibley said, “a bunch of the professors came out, and students from all years attended.”

At the event, the physics society awarded prizes for competitions that took place during the week, which include the bridge building competition, and a photo scavenger hunt.

Events like physics week are important, according to Sibley.

“We make these events to show everyone that physics is fun, and to bring the department together. We’re fun people, mostly.”