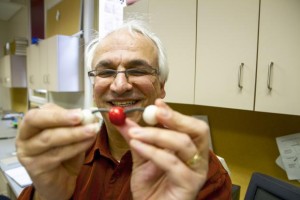 The way the universe holds itself together is more dynamic than we thought, according to a new study. Researchers led by Donald Fleming, a University of British Columbia chemist, have confirmed the existence of a new type of chemical bond, the force that holds together atoms to make everything from molecules to people to planets. Mount Allison chemistry professor Kashayar Ghandi laid the foundation for this discovery, known as vibrational bonding.

“This basically proves that our work was good,” Ghandi said. Ghandi led an experiment that discovered the vibrational bond in 2006; Flemming was a co-author. This experiment was replicated in 2008 and again in 2012. The data from 2012 replication was reanalyzed with the strongest calculations to date on the phenomenon, and was published last December in Angewandte Chemie International Edition, a German publication that translates to “Applied Chemistry” in English.

“It’s the same thing we predicted, except that it has much higher and more sophisticated level of calculation,” said Ghandi. “It’s a bond because of a dance of the molecules.”

Ghandi was not involved with the most recent paper on the subject, but he was pleased to see the new research. “Our experiment was the seed of dynamic bonds. We planted that,” he said. “To see that plant growing, that’s all that I want to see.”

Vibrational bonding is now the fifth known way that atoms can hold together. Theoreticians predicted the existence of vibrational bonding in the 1990s after an anomalous experiment in 1989 in which the rate of a certain chemical reaction slowed down as its temperature was increased. Chemical reaction rates usually increase with temperature, and a new type of chemical bond was one of the proposed explanations for this observation. Ghandi and his team were the first to find evidence for this explanation.

In a chemical reaction, a set of atoms or molecules, known as the reactants, interact to form another, different product. They may create intermediary forms in the process that are unstable and only exist in transition. The molecule in which vibrational bonds were discovered should have been one of these intermediary forms, but exists stably on its own. In other words, the intermediate form which is usually unstable and transient is the stable form for these kinds of molecules with vibrational bonds.

Ghandi said that this “earthquake” is an analogy to the wave character of atoms, an effect of quantum physics. All particles of matter display some characteristics of energy waves, which lead to this wave character.

In all of the experiments that led to the discovery of the vibrational bond, two atoms of Bromine, a heavy element, bonded to a light Muonium atom, a Hydrogen isotope, or one of several atomic forms an element can take. “This should never happen,” said Ghandi. “It should take the bond apart and shatter the whole system.” Ghandi also said that the movement of the Muonium atom caused by its quantum wave characters brings the Bromine atoms together, which explains why a compound that should be less stable than its beginning and end products are in fact more stable. The effect is pronounced in an atom like Muonium, which is one-ninth the weight of a regular Hydrogen atom and composed of a single electron and a single antimuon, a kind of antimatter.

While the recently published paper calls the bond vibrational, Ghandi said that the bond may be doing more than just vibrating. “They call it a vibrational bond. I don’t argue with that,” he said. “I called it in my paper a dynamic bond. They never focused on how it happens.” According to Ghandi, this dynamic bond includes the energy of the Muonium atom inserting itself between the two Bromine atoms, a factor not accounted for in the most recent study.

Ghandi wasn’t involved with the most recent vibrational bond experiment because he said he was occupied with other work.

“We are getting lots of groundbreaker results in other experiments that will be even higher than this that we have to publish,” he said.

Vibrational bonds have only been observed in an experimental setting, but they may be important in the natural world. Ghandi said he suspects that vibrational bonding plays a role in the structure of DNA, where a Hydrogen atom resides between two Oxygen atoms. However, running an experiment with Oxygen would be difficult, and Ghandi said he doesn’t plan on doing it himself.

Ghandi and his colleagues wanted to run their original experiment at the TRIUMF Institute in Vancouver, B.C., one of four places in the world that can generate the antimatter needed in its design. When their application to TRIUMF was declined, they ran the experiment at the Rutherford Appleton Laboratory in Oxfordshire, England instead.

A new type chemical bond has not been discovered since the early twentieth century. “The last time a new type of bond was discovered was in 1931 by Linus Pauling, a discovery for which he won two Nobel Prizes.

“The comment that [TRIUMF] gave me when I proposed this experiment in 2004 was ‘after all, how often do we discover a new type of chemical bond?’,” said Ghandi, “but we did it.”