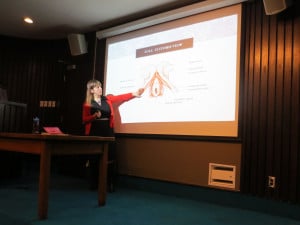 Finding what works in sex and relationships can be challenging and intimidating. As a part of Mount Allison’s Sex Week, professor of psychology Lisa Dawn Hamilton delivered a talk titled “Navigating Sex and Dating” last Thursday, March 10. Hamilton has worked previously as a sex educator and now studies positive sex education, monogamy, non-monogamy and sexual anxiety and stress.

Hamilton spoke about the sex saturation of modern culture and of the large amount of shame, guilt and stigma associated with sexuality stemming largely from media, culture and social groups.

“We shame people for their sexual desire all the time. We shame women especially for being sexual and having sexual desire even though sex is everywhere,” said Hamilton.

The social stigmatization of hookup culture and its specific effect on women was a focus of Hamilton’s talk. She said people often seek pleasure from hookups, but fewer women experience pleasure compared to men. Hamilton said that most research shows hookups between heterosexuals focus primarily on male pleasure because our culture tells us male sexual pleasure is more important. This, however, is opposite for homosexual women who view pleasure as an obvious achievement of sexual activities.

“I think it is very telling of how heterosexual women’s view of sexuality is shaped. We are socialized to think that what matters is male pleasure—and it’s pervasive. Hookup culture is generally a negative aspect of masculine culture,” said Hamilton.

“In hetero. relationships, people often don’t question monogamy, but in queer relationships […] there tends to be more questioning of all the norms. You are more likely to question: ‘Should we be monogamous?’” said Hamilton.

Hamilton also said an important part of having a fulfilling sex life is context, which includes mental state, relationship state, relationship characteristics, life circumstances and setting. Hamilton said that communicating with one’s partner is the key to getting one’s sexual needs met.

Throughout the talk, Hamilton emphasized the importance of talking about each individual rather than a partnership as a whole when discussing relationships. She recommended varying sexual routines and taking time to explore aspects which would make the individual’s sex life more interesting.

“Every individual has the right to experience sexuality the way they want and in the way that works for them […] and brings them pleasure,” said Hamilton.