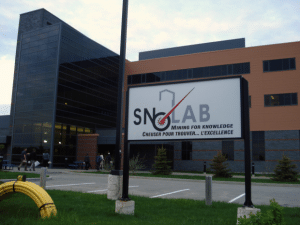 Imagine starting every day with a two kilometre elevator ride and a hike of the same distance through a mine tunnel, before showering with your co-workers and putting on your lab coat, hairnet, and goggles. This is life for over one hundred researchers at SNOLAB in Sudbury, Ontario, one of the world’s deepest underground physics labs.

The facility, sharing space with a commercial mine, is also one of the few places equipped to study dark matter, a hypothetical substance believed to comprise almost eighty-five per cent of the ‘stuff’ in, well, everything. Dark matter is essential to our current theories of how gravity works, but there is one small problem: we’ve never detected it. And worse, we’re pretty sure it’s invisible.

It is believed to exist because there are places in the universe where something is exerting gravitational effects. We just can’t see anything there. Thus, the theory goes, dark matter must be able to interact gravitationally, but must not interact with light. There is consensus among physicists, who are used to waiting decades before tangible evidence for their theories is provided, that it must exist. The question is how to catch it.

So dark matter is one of physics’ great white whales, and SNOLAB is their Pequod. The labs are full of incredibly sensitive experiments designed to detect the unbelievably tiny effects of dark matter. The problem is that the universe is full of radiation that sets off the machines.

For a visual, imagine sitting in the library, putting on your headphones, and turning a microphone up high enough to hear a dust mite fart. You realize how loud the library actually is when someone orders a coffee from the Flying Bean and your ears implode. This is kind of like that.

That’s why SNOLAB has to be buried under 6,000 feet of rock—it blocks out the background noise of cosmic radiation. It’s also a ‘clean lab’, which is why you have to shower and put on special clothing laundered in-house. Any dust (especially mine dust) in the facility could introduce radiation that could disturb the experiments.

One such experiment goes online this year—the DEAP-3600 dark matter detector, a massive acrylic sphere full of liquid argon, which will sit in a stainless steel housing. As dark matter particles ‘jiggle’ argon atoms, they will produce a signal that can be read by scientists.

Over a period of time, the signals will pile up. If they can be shown to be significantly more frequent than random events, they’ll have the proof they need that dark matter not only exists, it also behaves as predicted. The problem is that the equipment may not be sensitive enough.

“We could see up to a handful of events per month,” Mark Boulay, a physics professor at Queen’s University, told the Globe and Mail. “Or [we could] not see anything in three years.”

In the wake of the discovery of the Higgs Boson at CERN in 2012 and the recent discovery of gravitational waves from the Big Band at BICEP2 on March 17 of this year, the scientists at SNOLAB are looking forward with anticipation. “I think it’s the coolest question out there to be trying to answer,” said Kim Palladino of Massachusetts Institute of Technology.

Other experiments are already up and running at SNOLAB, so the race is on. Funded by the Canadian Foundation for Innovation, the current structure entered operation in 2011, and is open for tours from interested members of the public.