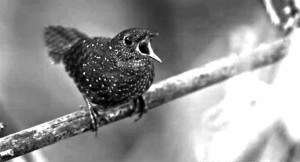 Asian songbird to be renamed ‘Elachura’.

A newly published study has found that a previously unknown family of songbirds is represented by just one species. Scientists were investigating families within the Passerida group (which includes sparrows), and identified ten distinct avian family branches.

The spotted wren-babbler, a bird that is found in Asia, represents the newly identified family that has been discovered. The data reveals that the bird is neither a wren, nor a wren-babbler. In fact, it has no close living relatives whatsoever. The researchers, located at the Swedish University of Agricultural Sciences, claim that the spotted wren-babbler is the only representative of a unique avian family that is the earliest surviving evolutionary subsidiary in the Passerida family.

The discovery was made by an international team of researchers led by Per Alstrom, associate professor at the Swedish University of Agricultural Sciences, as well as visiting professor at the Chinese Academy of Sciences in Beijing.

Evolutionary relationships and our understanding of them have been changing dramatically in the past ten years, as DNA technology is becoming more accessible and computers are getting faster at analyzing large DNA datasets. The Swedish team collected DNA samples from representatives of all known families within Passerida, which includes five major lineages of babblers. The team also included samples from other birds, which included the wren-babbler.

The team then assembled one of the largest DNA sequence datasets ever accumulated for the Passerida group (both in number of species and loci represented). This data was analyzed to reconstruct a multilocus family. It was through this analysis that the researchers discovered the spotted wren-babbler perched alone on a thin, bare twig on the family tree.

“Within Passerida, which contains thirty-six percent of all bird and sixty per cent of all passerines, the spotted wren-babbler is unqiue, as it is the only extant species that on its own represents one of the most basal lineages,” writes the authors in their published paper, found in the peer-reviewed journal Biology Letters.

This bird has fooled ornithologists and taxonomy experts for more than one hundred years. This is due to convergent evolution, which states that unrelated species evolve to look like each other simply because they occupy the same area. With animals such as songbirds, it becomes very difficult to determine which characters are most important for making taxonomic classifications.