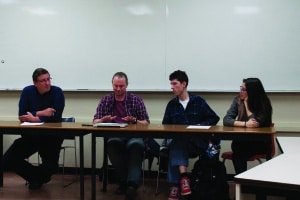 The development of computer technology and the digitalization of society in the past few decades have been extremely influential on modern ethical issues related to privacy, data protection, energy technology and the increasing disparity of access to technology.

These topics were the focus of a March 10 panel organized by students in Computers and Society, a third-year computer science class. The panel was organized as one of several group projects in the class which aimed to make what its students learned accessible to the campus and Sackville communities. Other projects included social media campaigns, podcasts and workshops on the relationship between computers and human society.

Panel members represented a range of disciplines in the computer and environmental science fields. The panel’s four members included: Michael Fox, professor in the department of geography and environment whose background includes work in urbanization, transportation, sustainable communities and community planning; Will Fiset, a mathematics and computer science student; Andrew Hamilton-Wright, professor in the department of mathematics and computer science whose background includes work in biomedical technology and in the use of computational tools in clinical decisions; and Laura Moore, an environmental science student.

The panel centered around the power and privilege associated with development, distribution and availability of modern technology, and on how these dynamics have contributed to shaping society. Topics ranged from the “digerati,” or individuals who have become economically advantaged due to their technological expertise, to the digital divide, or the economic disparity in access to technology, to the scale of technology and its impact in the modern world.

Margaux Daly, a fourth-year student who attended the panel, said, “The cross-disciplinary nature of the panel fosters a sort of lateral thinking that isn’t as common within the classroom.”

The discussion began by asking the panellists, “How are technologies shaped by society?” Hamilton-Wright said technology could be defined in numerous ways, such as any tool built and used for survival to more complex and modern digital inventions. Fox said urbanization is itself an influential technology and revisited this idea multiple times during the discussion. Fox said human aggregation in urban areas has sparked development in energy, transportation, and medical technologies and further progressed humans as a species. The panellists agreed depending on the demand, society could shape the use and design of technology. This focuses the type of research to develop technologies which will benefit a society depending on the needs or desires of a particular location or context.

Fiset and Moore provided some context for the discussion in part from how they incorporated certain lessons from their Computer and Society class into the discussion.

Hamilton-Wright also spoke about the theory that instead of desire being a factor in technological evolution, humans have a range of basic instincts which gradually cause breakthroughs and development depending on where research focus lies. Currently, energy technology has been in high profile due to climate change, but in the future those efforts will likely shift with the needs of human society in order to further propel technology development.

With files from Laura Moore, who sat on the panel featured in this article.