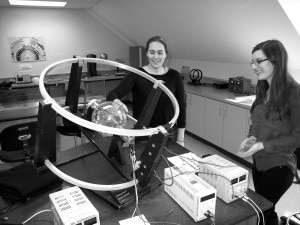 Women in science face innumerable challenges, with a wide gender disparity in their field affecting female physicists in particular. A delegation of Mount Allison students and faculty recently addressed these challenges at the Canadian Conference for Undergraduate Women in Physics (CCUWP), hosted at Dalhousie University from Jan. 8-10. In its third year of running, the conference aims to connect women studying physics at the undergraduate level with female leaders in their field, and to expose them to research and career opportunities in physics.

The CCUWP was started in 2014 at McGill University by a group of professors and students who replicated an equivalent conference series held in the United States. Undergraduate students have organized the conferences since then, which have included talks from both leading women physicists and students.

“It gave me a lot of confidence, because I saw women in physics doing what they love to do,” said Jasmin Tompkins, a second-year physics student and one of three Mt. A students to attend the conference

“There’s still a perception I think in some places that math and physics are hard and girls can’t do it,” said Catherine Lovekin, an assistant professor in Mt. A’s physics department who also attended the conference. “[Women] have to be a little extra determined to go into physics, you have to be willing to be in the minority…there are challenges, but they’re not insurmountable challenges.”

Lovekin is currently the only woman faculty member in physics, and is the first female tenure-track professor in the department’s history.

“I joke around here that I’m outnumbered by the Daves in my department,” said Lovekin.

Lovekin said women are a minority in physics as a whole, with gender disparity increasing at higher levels of education. The proportion of women students graduating in physics at Mt. A is typically very low, and deviates significantly from the university’s female-to-male ratio of about 3:2. Only one woman graduated in physics last year out of a class of 13; the graduating class of physics in 2013 was made up of entirely men. The highest number of women to graduate in physics in the last five years was in 2014, when four students out of a class of 13 were women.

Lovekin said she believes conditions for women in physics are generally improving, but that several recent exceptions have brought sexism in the field into focus. This past October, acclaimed astronomer Geoff Marcy resigned from his position at UC Berkeley after reports surfaced showing he had been sexually harassing his female students for almost a decade. She said incidents like this have increased the debate surrounding sexism in physics and how to make research settings less discriminatory.

Hannah Stegen, a fourth-year student doing her honours with David Hornidge, a professor in the department of physics, said one impression she gained from the conference was the need for more encouragement and role models for young women interested in physics and math in primary school. She said she also learned about ways women can promote themselves and push back against internalized sexism when they are a minority in a research setting.

“[Something] that a lot of women do that you may not notice would be…when I’m trying to talk about myself, I’ll say ‘I think I’m good at this,’” said Stegen. “A lot of studies and statistics were brought up that show that women were self-doubtful in these areas, and we kind of became aware of things we need to change to present a stronger presence in our field.

According to Lina Rotermund, a fourth-year honours student at Dalhousie University and the chair of this year’s CCUWP, more than 90 delegates from across Canada attended this year’s conference, up from last year’s 70 and the year prior’s 50. Rotermund said the bidding for next year’s conference location is open until Feb. 15, after which the next host school will be selected by a steering committee.