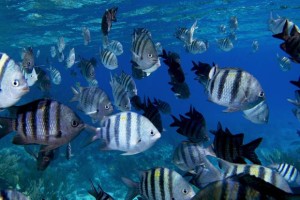 Marine habitat loss is a major challenge in next century.

Earth’s oceans cover over 70 per cent of the planet’s surface, but despite their immense size, they  are increasingly strained by human activity. A new study published in the journal Science predicts that marine animals are poised to undergo “a major extinction pulse”, a moment of sudden change, in the next century, comparable to the many human-caused extinctions of land animals. While its projections are grim, the study emphasizes that it’s not too late for humankind to alter its destructive practices and preserve marine animals.

The study was written by researchers from three major American universities, and led by Douglas McCAuley from the University of California. The paper, titled “Marine defaunation: animal loss in the global ocean,” amassed data from other studies to find patterns and make predictions about the health of marine animal populations. It states that humans began to intensively hunt animals in the ocean far later than those on land, so much so that the health of marine animal populations today are comparable to those on land 10,000 to 100,000 years ago. Since then, humans have been responsible for the extinction of hundreds of land animals while driving only 15 marine animals extinct, and none in the last 50 years.

The authors identify habitat destruction caused by new industries and technologies as the main threat to marine animals over the next 150 years. These threats include rapidly growing ocean-based industries, such as aquaculture, seafloor mining and oil drilling, as well as disruptive fishing practices. At present, an area of 50 million square kilometres, roughly five times the size of Canada, has been disturbed on the ocean floor by bottom fishing and is expected to grow.

The paper also describes conservation opportunities that may help marine animals survive future habitat destruction. Marine animals tend to be much more widespread and mobile than land animals, so a species may survive if a local population becomes extinct. The creation of protected marine parks will be critical to conserve these wide-ranging marine animals. Only 3.6 per cent of the ocean is protected today, four times less than the area that is protected on land. The number of marine parks has grown in recent years, but at present is insufficient to fully protect marine animals.

While marine habitat destruction was the paper’s foremost concern, it warned that many marine species are still vulnerable to extinction from overfishing. Approximately 90 per cent of large fishes have become extinct in at least parts of their historical ranges, and overfishing is unlikely to slow without better regulations. While the great whales were saved from total extinction due to a collapse in their numbers, highly valued fish today will only get more valuable with scarcity. Individual bluefin tuna today can sell for up to $100,000, and other luxury marine animal products, like shark fin, will probably get more expensive as they become rarer.

The paper also describes the many ways in which humans are dependent on healthy marine animal populations. Forty times the number of wild animals consumed on land is consumed from the oceans, which are of special importance to the diets of coastal developing countries. Marine animals are also important to the stability of the global climate. Corals release a compound that creates clouds which cools the climate, and predators like whales and otters facilitate the blooming of plankton which sequester atmospheric carbon in the deep ocean. These benefits coming from marine animals will be reduced if the study’s predicted extinction rates become reality.

While relatively few animals in the ocean have been driven to complete extinction, many animals have become extinct in some regions of the oceans. The study predicts that more marine animal species will become locally extinct in the near future. Even if some marine animals do not become completely extinct, their numbers may have been driven so low by human persecution that they become ecologically extinct, that is, not common enough to play a part in their ecosystem. Many great whale species are considered ecologically extinct in the wake of human hunting, some with only 10 per cent of their prehuntedpopulations remaining.