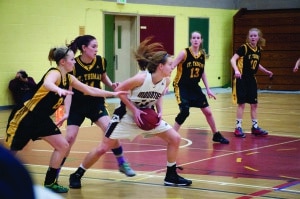 On Saturday Jan. 23, the women’s basketball Mounties squared off against the St. Thomas Tommies in what turned out to be a tightly contested game. It came down to the final minute, with the Mounties emerging victorious 57-55. After starting the second half of the season with a win to stay undefeated, the Mounties struggled in their previous two games, falling to a tough Holland College team and suffering a loss to the Mount Saint Vincent Mystics, whom they beat in a previous encounter this season. Coming into the game, the Mounties were looking to regain their winning form and start another winning streak.

Both teams had rough starts offensively, as it seemed as though there was a lid on the basket. It was a physical affair in which neither team would give so much as an inch of floor to the opposition. Jumping out to an early lead in the first quarter, the Mounties started to turn the ball over on offense, allowing the Tommies to work their way back, taking a 12-10 lead at the end of the first.

The Mounties showed some offensive adjustments, coming out of the quarter break with much better ball movement that led to more open shooting opportunities. These adjustments, along with some good effort on defence, allowed the Mounties to regain the leads early in the second and carry a 25-20 lead into halftime.

The second half was much of the same, with both teams creating opportunities on offense. The lead would keep going back and forth, with neither team really able to take control of the game. Moving into the fourth the game was still up for grabs, with neither team able to extend the lead beyond four of five points. With two minutes left in the fourth, the Mounties finally seemed to be pulling away, gaining a seven-point lead after point guard Sarah McGeachy made a tough layup while absorbing contact and on the next possession Maddy McDonald made a deep three to make the score 56-49. The Tommies then upped the pressure and the Mounties started forcing passes and turning the ball over, allowing St. Thomas to chip away at the lead until, with 16 seconds left, the score was 56-55. After a made free throw the Mounties lead was 2 with 2.9 and the Tommies had one chance to tie the game. The inbound pass was caught by the St. Thomas forward but was denied by the defense of Katie Lund and Kiersten Mangold, forcing the miss and securing the victory for the Mounties.

The Mounties were led by McGeachy with 14 points, three assists and seven rebounds. She showed great poise as she was under constant pressure by the St. Thomas guards and also came up with some key buckets down the stretch. McDonald also contributed 14 points. Late in the third with the Mounties down three, she regained the lead with five straight points. Even though it didn’t show in the score sheet Lund was a key to victory, especially throughout the fourth quarter, making hustle plays to save loose balls and being in the right position to box out and keep possessions alive. Sarah Ripley, off the bench, gave great energy and chipped in seven points and five rebounds.

The victory was the Mounties’ eighth of the season, moving them into a tie for second place. The Mounties will take on the top-ranked Holland College Hurricanes Wednesday, Jan. 27 at home, looking to make it two straight wins and prove they are the best team in the ACAA.