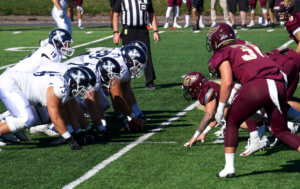 This past Saturday, Mount Allison hosted its annual Homecoming game against St. Francis Xavier University. The game was highly anticipated by its dedicated fan base, which ranges from current students to alumni. This exciting weekend is a time when students and parents alike come together to support the Mounties as they fight to come out on top.

“The crowd was amazing,” said Graeme Stevens, a second-year linebacker. “The support from the school and the community definitely helps motivate the team.”

As the game approached its end, Mt. A struggled to keep its 17-point lead and ended the game with a score of 35-27 for St. FX. “We led the entire game but we couldn’t finish them off,” said Stevens. “There are a lot of factors that play into the loss; we couldn’t point to just one.”

Tim Baljet, a third-year commerce student, was a spectator at the game Saturday afternoon. Baljet noted a change in the players following the second quarter. “Mt. A defence is acting too complacent,” he said. “They get ahead and get too confident.”

The Mounties experienced a similar occurrence during their previous game against Acadia, in which the Acadia Axeman only established a significant lead following the second quarter.

Joshua Hicks, a fourth-year commerce student, played the receiver position during the Homecoming game. “We came out strong. It went good until the second half, then our offense stopped bringing the ball to the end zone,” he said. “We need to focus on finishing the game.”

Peter Fraser, the head football coach, said, “In the first half we fed off the big crowd and played with a lot of enthusiasm.” However, Fraser said that defense was lacking late in the fourth quarter, and that the wind also impacted the team’s performance.

“We definitely can take some positives away, knowing that we outplayed them for the first three quarters,” Fraser said. “We are a young team in a lot of areas; it is all part of the process of learning how to win.”

The Mounties will travel to Lennoxville on Saturday, Sept. 29, to face Bishops in their fifth regular season game, and they are scheduled to play the X-Men again on Oct. 27 on the St. FX turf.