All for Love set to be great success 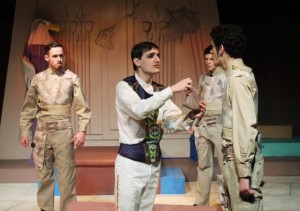 If you are familiar with movie depicting the modern retelling of Romeo and Juliet, then you might enjoy Windsor Theatre’s modern retelling of John Dryden’s neo-classical version of Antony and Cleopatra (titled All for Love), directed by Mount Allison’s director of drama, Glen Nichols. The first dress rehearsal took place this past Monday, March 18, in order to test the performance of the cast under a mock release with the difficult and unfamiliar lines. The amazing coordination of actors, lighting, scene direction, music, and metre execution brought together an amazing play that challenges the mind and delights the ear.

The name of the play, All for Love, refers, in large part, to the love relationship between Antony and Cleopatra, played by Dallas Burns and Kristina Gaudet. The story is adapted from John Gielgud, who modelled the play after the neo-classical style, eliminating the length and complications associated with Shakespeare’s original play. The adaptation is even more succinct; Nichols wanted to make a play that would be approachable, yet impressive to the audience. “I think people are really going to be impressed with the work the students have put into the play,’ said Nichols. “It wasn’t an easy task to get the students comfortable with the text, but we did and they did fantastic with it.”

Before the actors even began rehearsals, they went through an intensive period of text work, making sure they understood the meaning and timing of the unfamiliar metre. “The script was edited slightly for the sake of time, but the overall content remains true to the story,” said Nichols. “We really wanted to make sure the actors understood their lines and had them figured out before trying to pull this thing together,” said stage manager Gary McLaughlin. Although the length of the play has been reworked for brevity, it is far from the shortest play you’ll see this year, clocking in at an hour and fifty minutes with no intermission, so be sure to get very comfortable.

Altogether, All for Love is an amazingly crafted play, from the set design, to the music, to the beautiful lighting, which is rendered realistically through the work of Tommy Smith and his lighting crew. All for Love not only has a wonderful story but also looks and sounds authentic. Audiences will be in for a powerful treat when the play opens on March 20.