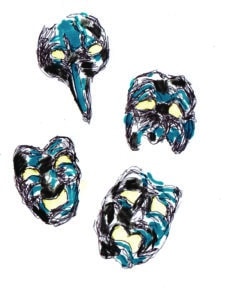 Il Dottore, Pantalone and Arlecchino walk into a theatre…

Students tried on emotive masks and explored old Italian archetypal characters in a fun-filled Saturday afternoon. The 15 students ranged from first- to fourth-year and came from many different departments. “As someone who doesn’t often partake in theatre, this workshop was engaging and a good introduction to commedia dell’arte,” said Logan Doyle, a fourth-year cognitive science student.

Paul Griffin, who is this year’s J.E.A. Crake Grad-in-Residence, graduated from Mt. A with a degree in English, religious studies and philosophy. He then completed a bachelor of education at Mt. A. During his time at Mt. A, he was heavily involved in all aspects of the theatre including carpentry, lighting, stage management and acting.

After graduation, Griffin trained for about 10 months in commedia and went on to be a part of several professional shows that were done in this style of theatre.

Originating in 15th-century France, Italy and Spain, commedia dell’arte consists of highly exaggerated acting, precise movements and engagement with masks. Within this tradition are seven key character archetypes, including “the well-meaning but unintelligent servant; the lovers; the greedy, lecherous master and the sly trickster,” said Griffin, “which are all archetypes you can see in any comedy show today.”

Students selected masks and freely explored any characterizations that came forward. Following this exercise, Griffin instructed the group on the traditional physicality and vocal intonation of each character. For example, the trickster character uses a raspy voice and moves in a very angular and agile way.

“As someone who is following a career in comedy I must never forget commedia dell’arte is mother of all comedy,” said Erik Garf, a fourth-year drama student. “My mask, the trickster, was not one you could hide behind. You must commit your entire energy outward through every part of your body.”

After playing with the characters, the students split off into small groups to perform short scenes called lazzis. These scenes provide actors with simple scenarios (the trickster has stolen the master’s money, for example) but require the actors to improvise dialogue.

“This experience was a unique way of engaging in character work,” said third-year political science student Emma Shipman. Griffin noted near the end of the workshop that he was “impressed by the group’s ability to take direction and apply it so quickly.”