An inside look at audio journalism 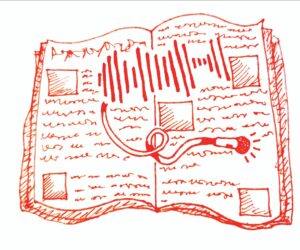 From the time of the Argosy’s conception in 1872 to now, journalism has changed quite a bit. We may have memories of our parents reading the newspaper each morning or perusing the magazines in the grocery store checkout line. Now, however, online outlets have increased in popularity and print has become less prominent. The same could be said of radio. What once gave us the soundtracks for long drives has been replaced by shuffling Spotify and listening to podcasts. Luckily, here in Sackville, we have been able to sustain both a print and audio source for our local and student news: The Argosy and CHMA.

Erica Butler, CHMA News Director and journalist, started in print journalism but found her way to the audio medium through community radio. She started her audio career working with CKDU, based out of Dalhousie University, on a radio show about environmental issues. “I had already been a print journalist for quite a while, and it was definitely […] a new set of skills to work on. It has a very different feel I think, and almost serves a different purpose in our lives,” she said.

For Butler, audio and print journalism “are both essentially forms of writing, [except] how you are engaging with your audience is so different.” She noted that there are some technical differences to the two mediums, like audio recording and editing. “Beyond that, it’s like writing for the same audience but a different mood,” she said. People often listen to radio while going about their daily tasks, or, as Butler called it, “casual listening.” The idea is to articulate the information effectively, so the point translates to the listener without having to consider too many details. In print, because the act of reading is likely performed without multitasking, the way we present information can be quite different. However, this is not to say that you can’t communicate technical information in audio mediums. Butler referenced the audio production of podcasts, which can be great at communicating details.

There are also differences in interviewing. “When you are quoting someone in print, you lose the tone, maybe some of the friendliness in their voice. You have to put that in yourself, and you have to really make sure you’re conveying what the scene is and the mood. You have to describe it,” said Butler. “Whereas in radio, you can set that just by the sound that you use and the voices you use,” she continued.

Tori Weldon, former CHMA and CBC journalist, has been working as a podcast producer for Branded Podcasts this past year. “I think, audio-wise, a huge thing is you can incorporate sound, like background sound, in a way that can be so immersive, in a way that is different [than] written word,” she said, echoing Butler’s statement. “I really like working in audio because you can get quite creative with the sounds that you use, and even just the gaps that you put between clips. […] There’s just so many things you can play with that make it a different experience for the listener,” she continued.

In terms of what goes into a good audio-delivered story, Weldon named three things. First is “a good story [..] told in an engaging way. […] You can take an exciting story and make it pretty boring or take a mundane story and make it really nice to listen to,” she explained. Second is sound quality. “I can find [poor sound quality] can take me out of the story […] in podcasting,” she said. Lastly, the use of sound and how one incorporates different sounds throughout can make an audio production stand out.

As for the future of audio journalism, Butler and Weldon were both hopeful. “People don’t necessarily turn on their radios to the extent that they used to, but now we’ve got podcasting, so it does prove that people want to listen to things,” Weldon said. “I don’t know what the future of podcasting holds, but I do think that audio is something that people continually come back to,” she continued. The growth of CHMA this past year is a testament to that. In many ways we are lucky, as “there’s not a lot of towns in New Brunswick [that] have someone who is able to be dedicated to do local coverage,” Butler said. “It’s not so much about the medium, it’s just the fact that there can be a reporter working,” she concluded.