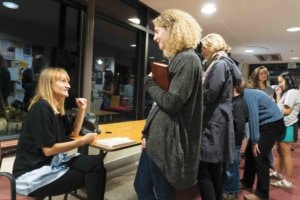 Refuse, reduce, reuse, recycle, rot: These are the five Rs that Bea Johnson presented to an audience of Mt. A students and Sackville community members on Oct. 24.

Johnson is the author of the book Zero Waste Home: The Ultimate Guide to Simplifying Your Life by Reducing Your Waste, which details her journey toward creating nearly zero trash. Johnson and her family only produce one small jar’s worth of trash each year!

Johnson’s witty, conversational presentation of her story highlighted a possibility to be stylish, practical and economical while living a Zero Waste lifestyle. Johnson chose to adopt this lifestyle because she was motivated to create a better future for her children. The state of the environment as well as the atmosphere of consumerism informed her decision. Her family moved into a much smaller home, underwent a massive decluttering process and committed themselves to creating as little waste as possible.

Throughout her talk, Johnson shared stories of her successes as well as the pitfalls she encountered. A laugh rumbled through the audience as she talked about her trials and errors in creating her own mascara that smudged down her face while out to dinner.

Because of this new lifestyle, Johnson found that she and her family were happier and healthier. With fewer items, her family was able to realize what was truly important to have and be able to experience. Her advice for people who are hoping to live this type of lifestyle is to identify your values and start living accordingly.

In addition to reducing their waste, Johnson’s family saved both money and time. As a result, Johnson noted the experiences her family has been able to have, including travelling all over the world.

Interest in sustainable living is found across the Mt. A community. Religious studies professor, Dr. Barbara Clayton, observed similarities between a Zero Waste mindset and a Buddhist worldview. “It’s the idea of meeting your needs, not your wants,” Clayton said, “and as [this is] actually an important aspect of a Buddhist approach to environmentalism, it certainly resonated with me.”

Both Clayton and Crosby noted how inspiring Johnson’s talk had been. Johnson expressed hope that the takeaway message of the event would be to refuse what we do not need, reduce our consumption, reuse what we do consume, recycle and rot (compost) what is left.