From Ribs to Ramen: Diner Reopens 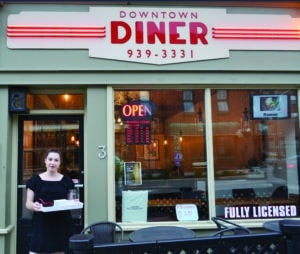 Last year, the Sackville restaurant Downtown Diner featured fish and chips, cheeseburgers and fried chicken. This year, however, its menu boasts items like ramen, sushi rolls and gyoza. The diner recently changed owners after the retirement of former owner Eric Johnson. Described by the restaurant’s new owner Young-joo as “Japanese cuisine with some traditional rolls and sushi,” the Downtown Diner opened again on Aug. 4.

Young-joo, a Korean immigrant who has taken courses in Japanese cuisine, said that the most popular items on his new menu are the sushi rolls and ramen. Downtown Diner also features bento boxes, a lunchtime favourite in Japan, as well as appetizers like spring rolls and agedashi tofu.

The change in menu, however, has left some locals feeling confused. “This used to be a Canadian food restaurant, so we have the same name and the same sign,” Young-joo said. He explained that some people enter the restaurant and are surprised to see that it no longer offers fries and sandwiches. “One day, we need to change the sign and the name…. Now, we are just focusing on the food.”

Still, the change has been positively received overall, and Sackville is largely happy to welcome new food options to the table. “Honestly, it’s exactly what Sackville needed,” wrote Sackville resident Hannah Anderson in her review of the restaurant.

Manami Onishi, a second-year exchange student from Japan’s Kwansei Gakuin University, was similarly excited that Japanese food is now available in Sackville, and was impressed by the food at Downtown Diner.

“The miso ramen which I ate was very close to Japanese style ramen,” Manami said, adding, “The taste was delicious for me…. I missed Japanese food.”

“We just want to provide some good and healthy food,” Young-joo said. “So thanks for coming here.” With a beloved location and a dedicated owner, Downtown Diner’s Japanese menu is certainly a welcome addition to the town’s plate. Itadakimasu!