From small-town Sackville to New York 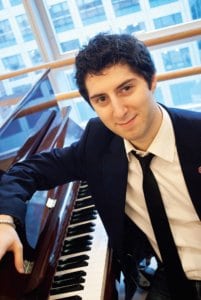 Since moving to New York City to compose musical theatre, Mt. A alumnus Landon Braverman has worked with Broadway legends, workshopped a musical and “discovered my Canadian-ness in a stronger way.” I spoke on the phone with him to learn more about his post-Sackville life.

Originally from Vancouver, B.C., Braverman caught “the bug” during a musical theatre training program at the age of six, which landed him a professional gig. “From there, it just sort of snowballed,” he said. “I was doing a lot of training in singing, dancing and acting throughout my years growing up in Vancouver.”

When choosing a university, Braverman was “really intrigued and excited” by Mt. A’s liberal arts foundation. “At a school like Mt. A,” he said, “I could write these major projects –  in some cases even get funding for them, which is pretty spectacular – and then fully produce them.”

Before graduating in 2011 with double degree in music and drama, Braverman hosted a radio show, wrote for the Argosy, toured the Maritimes with Elliott Chorale and performed in shows such as Company, The Last Five Years and Cabaret.

He also created his own work, two grant-funded composition projects. The first was 7 Mondays: A Cabaret, a song cycle that set 7 Mondays poems and photographs to music. He also composed Democracy Limited, a “bizarre musical” about the dramatic Student Administrative Council (the previous student council) election.

After convocation, Braverman moved to New York City to study musical theatre writing at NYU’s Tisch School of the Arts. In his first year there, he met his writing partner, Derek Hassler. Writers and composers were paired together for assignments, which Braverman called “essentially speed-dating for musical theatre writers.”

After working together in their degree, the two have gone on to focus on a variety of projects, including writing a new musical: The White Rose. “The show tells the story of the White Rose Resistance, which was one of the first successful underground resistances in Nazi Germany during World War II,” Braverman said. Led by university students, the resistance “composed, printed and distributed – all in secret – leaflets denouncing the Nazi Party.”

Outside of composition, Braverman has been involved in safeguarding the future of Canadian musical theatre. After attending a conference on the topic, he left with “this sort of sense that something needed to be done to help this community grow, increase the dialogue, and to build resources for young writers.” With Joseph Trefler, another musical theatre writer, he founded the Canadian Musical Theatre Writers Collective, which runs workshops and provides support.

“The mandate of the company is to create an interconnected and vibrant community of Canadian musical theatre writers from coast to coast and to promote their work and create resources for them to expand their work,” said Braverman. Members include Come From Away’s composers David Hein and Irene Sankoff, as well as “emerging writers you’ve never heard of.”

As he builds a network of Canadian musical theatre writers, Braverman wants current drama students to know the importance of networking. “People want to work with people,” he said. “Every moment counts; every connection counts. People want young talent. They want young people who are curious and interested.”

But most importantly? “Focus on your work. Focus on your passion, because that’s where you’re going to do your best work. Keep building as much experience as possible, but it is never too early to start building connections outside of Mt. A.”