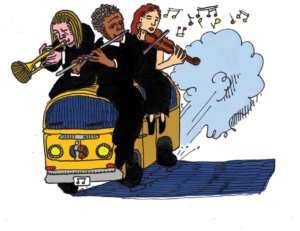 Everything was minimal except the audience

Friday night in Brunton brought Mount Allison students a performance of minimalist pieces. Road Movies, a minimalist concert, commanded the stage for the better part of two hours. Ms. Nadia Francavilla was primarily featured, as she performed several pieces on violin. The pieces were composed by some of the most recognized minimalist composers on the planet, to whom Francavilla referred to as “the fathers of minimalism.” This performance drew a large crowd due to the rare chance to hear this type of music live.

Francavilla, a violin professor at Mt. A, performed five pieces. The first, Ten Reader, featured no traditional instruments, just ten people on the stage reading random words from random books. The words clashed and complemented each other in a confusing yet oddly exciting arrangement of rhythm. The piece lasted nearly 20 minutes and saw the crowd transform from confusion to amazement at the abilities of those performing. A student in the audience jokingly asked, “What was the time signature?”

The third piece that was played was Museum Pieces. Written by Mr. Jordan Nobles, the piece is meant to be accompanied with paintings. The performers were scattered around the audience and stage, and played totally different melodies, producing a piece that was difficult to follow, yet beautiful.

“When one walks through an art gallery, one is confronted by unique artworks on different walls all together in the same room. Museum Pieces tries to capture the spirit of multiple works together in the same space,” said Nobles on his piece. This was perhaps the most traditional of the five pieces. It was much easier for the ear to follow the story, and wrapping your head around the concept was not difficult.

The headlining piece, Road Movies, is a three-segment violin and piano composition that is intended to be foregrounded by three short movies. The unconventional accompaniment makes it imperative that the musicians be perfectly in sync with not only each other but the films as well. Francavilla played violin and Carl Philippe Gionet (another guest performer) played the piano. The crowd was enthralled with the repeating progression of chords, in which one could easily lose oneself.

“I loved it,” said Graham Kidd, a second-year music student. “This kind of music puts you into a trance.”

The crowd absolutely adored these performances. After each segment ended, there was thunderous applause followed by excited murmurs. It is not every day that students get a chance like this to explore a lesser known genre.

“It was great, I loved all the compositions,” said Kidd. “You don’t get this kind of music all that often. It’s pretty rare. You have to take every opportunity to hear it live, because it doesn’t happen at small universities like this.” It is a privilege to be exposed to these niche genres.