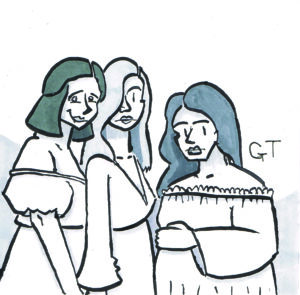 Picture it: it’s a dreary Tuesday evening, and there is a dampness in the air that sends a chill through your body. You feel an ache, an exhaustion really, deep in your bones from hunching over your laptop all day. All you want to do is go home, enjoy a hot beverage, and wrap up in several blankets to escape the miserable atmosphere outside. While I would usually agree that this sounds like a good plan, I would like to offer an alternative. Grab a friend, head on down to the Sackville Commons, and come listen to some delightful folk tunes.

I am always impressed by the breadth of musical talent I can discover in Sackville. Last fall I had the distinct pleasure of listening to Petunia, a musician whose uniqueness knew no confines. This fall, I discovered two more musicians that have proven to be a delight. K.C., a local musician new to the area, and Lunar Bloom, a band from Ontario.

K.C. opened for Lunar Bloom, playing classic country music. However, instead of singing about how he lost his girl, his truck, or even a love for his mom, K.C. wrote about being born to die. K.C. draws inspiration from his children and his works are filled with nothing but love for his young muses as well as those close to him. “Born to Die” is about scaring away monsters that fill his children’s nightmares, the bittersweet nature of growing old, and the joy of seeing your children become independent. Despite the title, it is an endearing song much like the other music he played. He was engaging and his music was true to the genre, but he put his own personal spin on it. Overall, he was a fantastic opener for Lunar Bloom’s performance.

I am not entirely convinced that the members of Lunar Bloom are not otherworldly beings. For three singers to start in-sync, on key, and acapella without any cue, looks, or lead-in is pure magic as far as I am concerned. Their voices were enchanting, drawing the audience in with their harmonies, lyrics, and effervescent personalities. However, I would be remiss not to mention their talented band members, who elevated every piece to new levels, constructing the mood to fit the singers’ words. I enjoyed every single song they played and the messages that were behind them. One of the members jokingly referred to them as playing “steam powered folk music,” but it is a very apt title. One can enjoy their music on the surface for the harmonies and the upbeat thrum of their songs, or one can look deeper into the meaning past the smoke and see that this music is not simply good, but beautiful, and has a powerful message.

Much of the music they play is based on real experiences, and their songs portray the raw emotion behind each event. The most powerful song, in my opinion, was called “Monster,” and covered the trauma of sexual assault. There are no words to describe it. Everyone in the audience was still, eyes glued to the performers as they poured everything into this song. We all collectively held our breath as they sang. Simply put, everyone should listen to this song. Its sequel, “Apology,” deals with learning to love oneself after an assault and is equally moving.

We were sailors caught in their siren songs. They tackled topics such as self-love, depression, losing an ovary, and even “silly little” love songs, all with grace, passion, and tenacity. I implore everyone to go out and listen to their songs, if not for the folk-style, then for the content they provide; these talented artists deserve more attention.