No other event as sweet as The Sweetest Little Thing 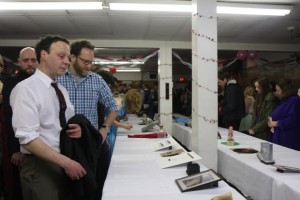 This past Valentine’s Day, the Owens Art Gallery, the Struts Gallery, and the Faucet Media Arts Centre held the Sweetest Little Thing, their annual fundraiser.

The event, which boasted an attendance of approximately four hundred individuals, was celebrating its fifteenth anniversary this year. While the true and tested elements of the recipe were there—the cake walk, the Insta-Lovin’ Photo booth, and the art auction—the organizing committee brought some changes to this year’s festivities, which were generally very well received by the attendees.

For the first time, instead of choosing Mount Allison’s Owens Art Gallery as the location, the event was held at Sackville’s Royal Canadian Legion—making good use of the spacious second floor of the building. Holding the event at the Owens would have stopped faculty and librarians from attending, who couldn’t access university property at the time.

“We decided to hold this year’s event at the Legion in order to make sure everyone was able to attend,” said Gemey Kelly, director and curator of the Owens Art Gallery. “We were not sure what to expect since it was a different venue and many people had left Sackville due to the strike, but I think everyone was ready for a party.”

The only hiccup seemed to be the space provided for the attendees’ outerwear, which rapidly turned into a somewhat disordered cluster of coats and scarves, but clearly reflected the laidback nature of the event.

While formal attire was encouraged, it was also an opportunity for attendees to get creative and even outrageous with their outfits. With secret judges picking the evening’s best outfit, eccentricity was an integral part of the event.

But the attendees’ energy was not only focused on their outfits and art buying, it was also evidently directed to their dancing. Toward the end of the evening, the spacious area at the entrance of the second story rapidly turned into a grooving dance floor, with the organizers’ mix of 1980s crowd-pleasers working very well with the eclectic crowd composed of students, parents, and children. The surreal atmosphere created by such an eclectic mix of individuals paved the way for some unbridled dance moves by those still present. A friend of mine very accurately compared that portion of the evening to something that is usually only found at weddings—people of all ages coming together and grooving without restraint to some past hits.

Kyle Forbes, a third-year fine arts student, was one of the artists whose work was featured in the auction.

“It was a shame that they couldn’t hold the event at the Owens, but the still legion made for a great venue,” said Forbes, who also attended last year’s Sweetest Little Thing. “The layout of the tables made it easy to move around and appreciate the work.”

The Sweetest Little Thing’s ability to unite an entire community truly makes the event an important staple for the Sackville art community. Yet, while the event is obviously art-centric, it provides an opportunity for students and individuals from all backgrounds to gather, celebrate, and show off their best outfits in an informal fashion for a holiday that can often be quite stressful for some of us.