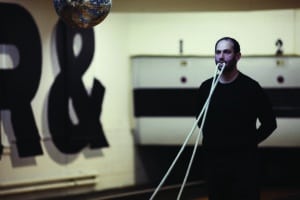 Dornan and Léger performed four pieces. The first one was done by Léger, who whispered to a two-by-four, then picked it up and tapped at it, dropping it to the floor and whittling away its centre. Dornan’s piece followed – with a basket attached to her stomach, she clapped in morse code and pulled braided rope from the basket.

Léger’s next performance involved a rope; with his hands behind his back, he carried its tangled fibres in his mouth. He inflated paper bags and dropped the rope onto them. The last piece featured Dornan cutting out squares from a long garment, which she donned as she licked chocolate with razor blades embedded into it.

Performance art doesn’t have much of a recent history in Sackville, so for many audience members, this was their first experience with art of this kind.

Opening with a disclaimer, the artists asked the audience to excuse the cameras present, as they were not part of the performances, but were there solely for documentation. Due to the ephemeral nature of performance, the group relies on video documentation to archive their work. But this can become an issue, as the ephemeral nature of the work is a property that amplifies it. With this medium of art, the work is physically present, then gone when it is finished, making it difficult to record.

During a discussion period led by the artists, an audience member raised concerns about the process of documentation, questioning the importance of an act that changed the quality of the work.

The audience member brought up questions like: Does the production of video and photographs create the potential for the experience to be refabricated? Is the act of documentation creating permanence in something regarded for its transience? Such questions invited a discussion of the commodification of art. 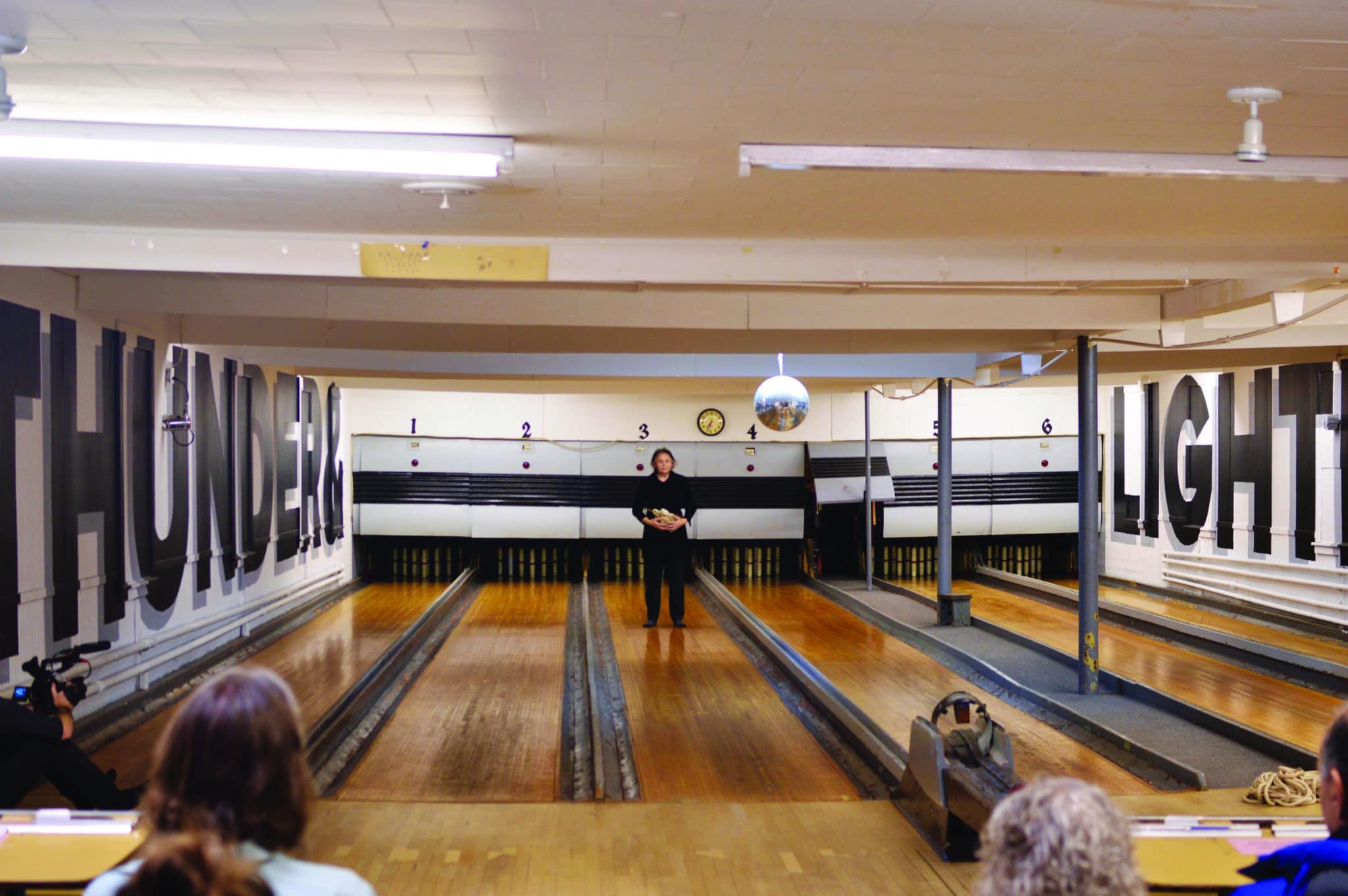 “It is the nature of the beast nowadays….Living in an art world and market, it is like you have to continuously prove yourself over and over again with your documentation that people can buy,” Dornan said. Both Dornan and Léger have sold components of their performance work in the past.

Documentation can be an intrusive presence in a performance piece, as it obstructs an artist’s intentions and inhibits viewers from fully immersing themselves in a work.

Selling artwork like Dornan’s artist book or Léger’s photographs of performance work is an artist’s primary method of making profit. PERFform 17’s tour was made possible by various sponsors. As artists are not shielded from the effects of the capitalist society we live in, it is important to consider the creation of visual art as a valid occupation.

A particularly fascinating part of the performances was the exploration of the bowling alley. As a travelling tour, the duo have performed in their share of unconventional spaces, but the bowling alley was a first.

“An ideal setting would be a white cube so that you are completely free of everything else around you, kind of like an exhibition. But [on tour] that is often not the case,” Léger said. “We are adaptable.”

Space is an important aspect of performance art. For example, it was hard to ignore the creaking of the wood floor in relationship to Léger’s piece when he whittled away at a two-by-four’s wood fibres.

Dornan and Léger accentuated the vertical depth of the bowling alley by moving up and down the lanes. “We hope people [concentrated] on the actions and the gestures,” Dornan said.

To ask a viewer to disengage from an artist’s environment is specifically challenging in performance work. The occurrence of the unlikely events on this temporary “stage” required reconsideration of spaces designed for recreation and entertainment. Transforming the intended purpose of a space to change the way we navigate ourselves within it acknowledged the absurdity of the performativity and also the environment itself.

The audience-performer dynamic was an important component of the work. Léger prompted the audience to relax alongside himself and Dornan at the conclusion of each work. In doing so, he acknowledged that audience members may have been experiencing discomfort.

Supporting local artists is important for Sackville’s art scene, and this show allowed residents to practise genuine support. Sackville provides the right environment for the art form, but the local performance art scene has room to grow. Hopefully there will be a PERFform 18 that will challenge audiences and experiment with intriguing new ways of visual representations.