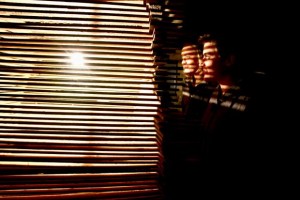 Sackville’s artists show off their work around town.

Last Friday night, I found myself gingerly walking up a narrow stairwell that led to a stranger’s apartment. At the top of the stairs, I was met by a shrine-like collection of portraits of porcelain dolls, a carefully placed lock of human hair, and an array of kitschy home knick-knacks. I didn’t get lost on the way to a party, or accidentally stumble into an old woman’s living room. Rather, I was midway through my loop of the Sackville All-Inclusive Gallery Hop, and was viewing an installation by fine arts student Jillian Gooch, situated in the hallway outside her Main Street apartment.

The gallery hop was filled with an impressive number of interesting, unusual, and wonderfully strange exhibitions, like Gooch’s, that were created by local artists and set up in venues both conventional and experimental. The event was a one-night-only, town-wide art exhibition organized by The Blazer Sisters, a duo comprising fine arts students Rosie Butler and Alix Wilson.

As indicated by its name, the event hinged on the theme of inclusivity—an idea that manifested itself through the diversity of artists, media, venues, and audience members. The aim of the event was to create an opportunity for all kinds of artists to display their work in an unintimidating and non-traditional setting. To achieve this, Wilson and Butler took an ‘anything goes’ approach to the curation process, and encouraged anyone and everyone to contribute to the event. There was no jury process, and there were no artistic guidelines.

“Anyone who wanted to make work and show their work could be a part of [the gallery hop]—no matter what that was,” Butler said. “So … people that don’t normally fit into a typical art show format or gallery space could be a part of this, and have equal opportunity.”

The result was  an artistic smorgasbord, with a sampling of media ranging from portraiture, sculpture, performance art, photography, and drawings. The varied works drew in an equally diverse and impressively sizeable crowd of gallery hoppers. As we moved from location to location, we encountered new groups of community members, which provided ample opportunity for discussion about the different exhibitions. This was perhaps the most successful part of the inaugural gallery hop: the way it engaged such a large part of the community and generated a rare sort of conversation about the art that is being created in Sackville. In this way, it truly was an inclusive, immersive event.

The gallery hop traversed the whole of Sackville’s downtown, encompassing locations both on campus and in town. Most of the more conventional exhibiting spaces were used, like Gairdner Fine Arts Building, which featured an incredibly impressive exhibition of work by the first-year fine arts students; START Gallery, where Lisa Theriault debuted her collections of prints and animation in an exhibition entitled “What’s It All For?”; Thunder and Lightening, where pieces by Butler and Wilson graced the back walls; and Struts Gallery, which featured artist-in-residence Brandon Blommaert’s closing reception of animation work, as well as a collection of prints made by Struts’s March break camp attendees.

However, one of the most interesting elements of the event was the way that certain artists worked outside of gallery spaces, and instead chose to integrate their work into unexpected places and local businesses. As Wilson put it, this allowed people “to be involved without even knowing it,” because people could go about their business while also stumbling across one of the temporary exhibitions.

Music students might have been shocked to see Posy Legge’s collection of large-scale portraits of porn stills in the Music Conservatory, while those walking down Bridge Street would have caught sight of Jesse Francis and Jeanne Fries’s interactive geometric sculpture in the snow in a corner of Memorial Park. Ducky’s and Pickles also participated as venues, displaying the works of Amanda Curti and Alex Francheville, respectively. Curti’s frank and subtly voyeuristic portraits and Francheville’s witty and comical drawings looked so at home on the walls that it made me wonder why these establishments don’t feature student artwork on a more regular and permanent basis.

The All-Inclusive Gallery Hop was the first event that Butler and Wilson have presented as The Blazer Sisters, but the pair plans to organize similar art and community events in the future.