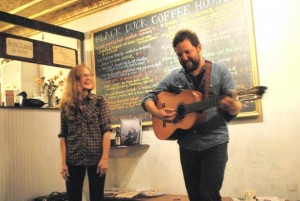 A handful of key members of the Sackville music scene will be departing this month and leaving noticeable gaps behind them. While the absence of a few individuals will have ramifications for a few of the scene’s most active and beloved groups, this is neither an unusual nor negative occurrence for the town and the music lovers within it. In fact, these upheavals keep the Sackville music scene relevant, interesting and vibrant.

The last few months have been littered with the slow departure of key members of the Sackville scene: Evan Matthews, a member of the Mouthbreathers and Yellowteeth, as well as a constant collaborator and drummer for many local acts will be headed to Halifax; Scott Brown, a member of Kappa Chow and Jerked Damaged, as well as a prominent CHMA staff member will also be headed to Halifax; and Nic Wilson, a member of Yellowteeth and the Mouthbreathers, has departed for Montreal. Additionally, Jess Palmer, co-curator of last year’s Stereophonic, and members of Bolivia have relocated.

The impending absences of these musicians do not mean their projects are necessarily finished. Despite two members moving to Halifax, Kappa Chow has a short tour planned and a seven-inch single slated for release soon.

This isn’t the first time that a local band has remained active in spite of a partial relocation. Astral Gunk, a band comprised of former and current Mount Allison students, has members in Halifax, Montreal, and Sackville, and manages to play shows, even finishing a tour that included dates in the United States. Brown noted that “new bands are starting to form amongst the remaining members of bands, and the scene will adapt.”

Sackville’s transient music scene and the radical shifts within it are nothing new. With the university ensuring a fresh crop of music lovers each year, and the past and present presence of seminal Canadian artists like Julie Doiron, Steve Lambke, and Shotgun Jimmie, attracting musicians has never been problematic. Matthews compared the scene to an “internal combustion engine that turns over every couple of years,” in which people leave, new genres and collectives emerging in their wake.

However, the Sackville scene is not simply dependent on the artists operating within it. Audiences, financial supporters of music, venues, and those around town with musical knowledge and technical expertise are all fundamental aspects of any local scene. That the artistic output of this small, relatively isolated town is internationally renowned is due in part to these aspects, many of which are undergoing changes this year as well.

Matthews noted that show attendance has decreased in the last few years, and that “the local scene and student government aren’t as intertwined as they used to be, although that doesn’t have to be the case.” The emergence of new venues, like the Black Duck Inn, the continued support from community members, and CHMA all contribute to Sackville’s strong artistic foundation. Although Stereophonic and SappyFest, the two annual festivals held in Sackville, continue to “prevent stagnation, and allow local artists to be part of a regional and international conversation,” said Matthews, SappyFest’s recent financial strife and management changes leave the future uncertain.

While some individuals, especially those associated with the university, may be leaving this year, many artists who are unaffiliated with Mt. A, such as Jon McKiel, Jesse Matthews (who operates under the monicker JFM), and Julie Doiron have chosen Sackville as a place to live and make music. Brown said that he has noticed more collaboration between “university students and older artists” than was previously common, and predicts that this kind of versatility will be essential in the coming years.

No one is certain of what is to become of the ever-changing scene, but the combination of young artists, new venues, diversified connections, and new challenges will certainly result in much change. However sad the departures of local musicians and community members can be, they often lead to the kind of change and adaptation that keeps the scene relevant, vibrant, and interesting.