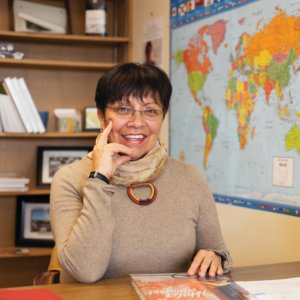 “International Women’s Day is an opportunity to celebrate and recognize the women who struggled before us. We cannot forget these origins. We wouldn’t be who we are as women today without them. For that reason, I celebrate women and their struggles every day and everywhere I go.

“I’m originally from Chile where I studied Spanish for five years at the PUCV (Pontifical Catholic University of Valparaiso). I came to Canada and taught in Ottawa and later taught in the Toronto Board of Education for 1½ years. I started at Mount Allison teaching Spanish at night, and eventually transferred to this department. I received my master’s degree in Spanish 12 years ago in Spain.

“I would tell my undergraduate self to learn as much as I can from any situation I’m in. I wouldn’t change anything I’ve done because then I wouldn’t be who I am today, and I’m pretty happy with who I’ve become.”

Jocelyn Dowling has been committed to rehabilitating the injuries of Mt. A’s student athletes for the last 14 years. Being a lifelong athlete inspired Dowling to pursue a B.Sc. in human kinetics, followed by a postgraduate diploma in sports injury management.

Dowling considers the greatest reward of working with “highly motivated, ambitious” Mt. A athletes to be “seeing an athlete back on the field/court/ice after spending weeks or sometimes even months with them rehabilitating an injury.”

“Even in a male-dominated profession like athletic therapy, I chose not to let my gender hinder my advancement in this profession. I simply earned the respect of those around me through my values, my work ethic and my compassion for others.”

“I am thankful to have a day when we can celebrate all of the women, past and present, who have fought hard to give us the freedom and liberties we know in this day and age.”

“Celebrating International Women’s Day means raising awareness that all women should have a voice and that voice should be heard, whether it is at home, at school, in the workplace or in the boardroom. It means allowing women to make choices … and it means celebrating the accomplishments made by women thus far.

“I have a lot of interests outside of work. I would say that in many high-level positions, a lot of those interests would have to take a back seat. I think is a choice that many people make, though I don’t know whether that’s because of your gender or your interests.

“On my floor, if you look around there’s 17 of us, and one male. And out of the four VPs, there’s two female and two male. In the Board [of Regents] in general, the balance seems to be pretty well even. I feel that my views and the comments I make are well respected.”

“I’d always known that I wanted to go into the sciences. I spent the summer before my first year programming, and I kind of realized, ‘Oh, I enjoy doing this.’ It helps that I’m pretty good at it.

“As I finally did leave home and had this opportunity to develop and be my own person, that both kind of helped me accept and be the person I am, which also then impacted me to more confidently do the things I do. It’s kind of a cyclical thing: my being trans enabled my confidence in my social interactions, which enabled my being trans.

“[International Women’s Day] is a reminder. When the norm and the stereotype is so strongly the white, heterosexual, male ideal, anything that moves that perspective and reminds people, ‘I have my own ways of knowing myself,’ is important.

“For me, being a woman means just actually existing. For a long time, I didn’t really do anything.… I didn’t exist, really. That’s how I kind of think about that. So much of how I contextualize myself and think about my future comes from knowing myself and being able to actually feel like I can and should take up space and be expressive in that – like I deserve to be here because I actually know what it is that is existing in this space I’m taking up.”

“I’m a proud feminist because I do believe in equality. It’s not a matter of which is the best gender; that doesn’t matter to me. It’s more about the fact that we can all coexist in harmony, and if I can do the work that you can do, treat me fairly.

“Because I chose aviation, I knew that I’d have more eyes on me, so to speak. There’d be people wanting to hear my story or there’d be people checking in on me to make sure that I’m getting through. But I also knew there’d be people who wouldn’t be as supportive. Educationally, I just made sure that I set myself in a position where I’m not just listening to all the negatives. I surround myself with positive people to help me achieve my goals.

“International Women’s Week should be an everyday thing. I am a woman. I see myself every day. I see people like me every day and we should be proud of that. It should be an ongoing thing, celebrating people who matter just like everyone else.”

“I think that [society] is changing so fast, because women are so good at being flexible. Women also are very cheerful, so it’s very important for us to make a great society. Also, when I was a junior high school student through university, I was in a woman’s school so I stayed in women’s society for a long time, and I think women can do everything.

“In Japan, sometimes they discriminate between the woman and the man. [In sumo] women can’t stand on the field because it’s tradition. Like that, many sports or islands we can’t enter, so sometimes I feel like it’s discrimination. But Japan wants to take care of tradition, so maybe it’s difficult to change it.

“Compared to now and a long time ago, women’s [status] is very high now, so we can challenge everything. So if we have any interests, we should challenge, and mistakes are also good. We learn from that mistake, and then challenge again. This makes a new world and new society.”

“Because it’s such a small campus – and I don’t know if it’s because a lot of people aren’t exposed to different cultures a lot in the Maritimes – sometimes I’m tokenized as, like, the woman of colour that people know, which is a good thing but also a bad thing.

“I love being a woman. I feel like there’s a lot put on your shoulders as a woman, especially for me because I’m a woman of colour. I super identify as a feminist. Being a woman, for me, means so much more because I feel like I’m representing other women and women of colour and Muslim women.

“I kind of let a lot of stuff get under my skin, and I think it might have held me back from opportunities, and a lot of people know how to get under my skin so they’ll take advantage of that. And I think, just, be aware that all battles are important, but put yourself first.”

“The male-dominated patriarchal system that was imposed during colonization took away the equality enjoyed by Indigenous women prior to contact. And then, the Indian Act removed all the identity and and respected roles in society by removing Indian Status, breaking down the traditional family system and changing everything. The Indian Act stated that ‘To be an Indian, one had to be an Indian male, be the child of an Indian male or be married to an Indian male.’

“On another side, my grandmother on my mother’s side came on a boat alone from Ireland in 1916 at age 16 and upon meeting my grandfather and being taken to Nova Scotia, was beaten by my great grandfather because she was Irish and Catholic.

“International Women’s Day to me signifies how brutally hard we have had to work to just obtain minimal equality and [that] we have a long way to go, no matter what our culture.

“If you have a feeling of being ‘less than’ or ‘not as smart as’ or ‘weird,’ embrace that. I wish I could go back and embrace her as she was then, at your age. I can’t, so I am embracing her now and really honouring myself in any way I can. Always listen to your gut instinct; it will never do you wrong. Ever.”

Eva Leitner, staff at the Flying Bean Café at the library

“We moved to Canada from Germany in 1994. My husband and I built a business in Dieppe, a bakery and coffee house, and we ran it for eight years. When we sold it, we moved to Sackville and built a house on Silver Lake. After the house was built, I needed something to do! I started at Mount Allison in November 2003. Since 2007 I’ve been full time at the Bean, and I love it here!

“Usually, I celebrate Women’s Day with my friends. If we can, we give each other flowers and we do something together. If not, we usually at least text each other! I also tell my grandchildren. I have twin granddaughters, so I’m kind of starting them early.

“I think women are always under-celebrated. This is at least one day where the focus is on us. On Women’s Day, I think about women before us who made the way that we can celebrate Women’s Day, that we can live as we live as women in Canada. In some countries, women are discriminated against, not even taken as persons. Our society has achieved at least that by now. That’s why we kind of get complacent, and think, ‘Good enough,’ but we still don’t have 100 per cent equality.

“Women should work together, put their self-interest aside to achieve goals for everyone. It will be good for our daughters and granddaughters. We can achieve more if we are all united.”