A great place to START 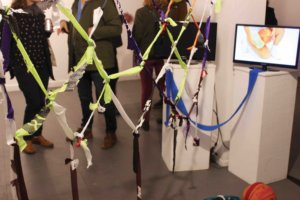 START Gallery provides a jumping off point for student artists

The doorway to Struts Gallery, Faucet Media Arts Centre and START Gallery, under bright yellow mouldings, stands out against the semi-industrial landscape of Lorne Street. Although it may seem out of the ordinary to find a gallery here, this place is just that: extraordinary. START’s fall exhibition showed the works of student artists Marissa Cruz, Breana Darlison, Madeleine Hansen, Meagan Chaput and Evan Furness. The works were shown between Oct. 29 and Nov. 11.

A sense of catharsis was an undertone common to several of the exhibits, especially those done by Hansen and Chaput. The artists found ways of expressing their emotions non-verbally. Hansen’s exhibit, titled I am Not Me, This Body is Not Mine, consisted of a series of drawings of what she described as “very strange, amorphous human figures that are made up of human parts, but not quite recognizably human forms.” Going further into detail about the meaning of her work, she explained that it “centres around the idea of body dysmorphia and this idea of viewing your body in a contorted sort of way.” The work, epitomizing some of the struggles Hansen has faced, holds a great deal of meaning to her, as does the medium itself.

“I’m not very good at verbally expressing myself,” said Hansen. “But I feel much better at visually expressing how I’m feeling and I feel like these drawings are like a very visual representation of a specific time in my life and the mental illness that I’ve struggled with for many years … [which] came together for these drawings.”

Reverie, Meagan Chaput’s exhibit, consisted of a series of small objects made as a reaction to “two different and opposing relationships I’ve had and kind of idealizing them and trying to make these things that hold a lot of meaning.” To her, it is very important that the audience understands that “there is some sort of narrative” behind her work. Chaput also prioritizes being selective about what she includes in her work. “Not telling the whole story, I think, [is] really important,” she explained, “because sometimes you can say too much and then the work doesn’t mean what you want it to mean.”

Breana Darlison created Hicks, an exhibit based on the curation and arrangement of found objects. She says that she “started to recognize things in certain areas that I was picking stuff up in … rural, Canadian areas…. I started recognizing patterns with addiction and poverty and xenophobia and stuff like that.” Her exhibit centred around bringing these ideas to light.

“I’m from a rural area but I lived in a big city, Montreal, for [about] ten years,” Darlison said. “I kind of have that separation from that xenophobic ideology [more present in rural areas] now. When I go back home and I see those things, it’s really obvious to me, and concerning too. So that’s mostly what the piece is about.” She went on to apply these themes, which have become such salient issues in the political climate of North America today, to her work. “Mostly, I’m interested in bringing light to what I see as the real world.”

Marissa Cruz’s work also connects to a representation of the “real world,” as she addresses the representation of gender, race and sexuality. The work shown by Cruz during this exhibition, Clean Passes, epitomizes these themes using a variety of media. She explained that her work overall, which is primarily videography but also engages in sculpture and performance, functions mostly “as a way to reconcile the complexities that [are] being femme and also a mixed-race Filipino woman. So it kind of bounces around in there, and talks about the absurdity of games and rituals too.” Cruz said that her favourite topics to address in her work implicate humour, sex, race and gender – topics which often intentionally create tension in her audience as she works towards sparking conversations around acceptance. Cruz uses her art as a way to address taboo topics, given that the “stuff that I talk about [through art] isn’t the kind of stuff you can talk about in real conversations. I don’t know if I’m really trying to say anything, but at the same time I’m making it really explicit.” 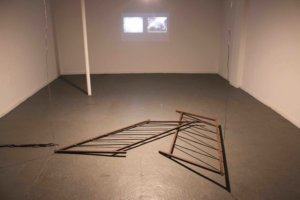 Tucked away at the back of the exhibition space, Evan Furness’s Old Wood & Steel Songs created a “shed vibe,” as he put it, bringing the natural world indoors. Now in his fourth year, Furness has been working on presenting a plot of land owned by his family and creating this sense of place for the exhibit over the course of two years. He has created many iterations of this exhibit, from drawings and prints to “the pared down video/sculpture/zine relationship,” present at the gallery, which he decided worked best. The exhibit is meant to address his “interest in how place kind of holds memory but only reveals it to people who know about it.… If you just drive by or walk by that lot when there’s nothing on it, it’s just like this empty space that has no meaning to anyone except for the people who know that there used to be something there.”

START itself is an idea fairly unique to both Sackville and the Mount Allison community. The initiative allows students to gain experience hosting their own shows, something that those in larger communities may not have the opportunity to do. “In the fine arts department, we work towards having things completed for submission dates and things like that just like anyone in non-fine arts does,” explained Darlison. “A lot of people, as they are working on these projects in class, they’re also working on work outside of that, and this is a really special place where, you know, you can actually show what you’ve been doing. Being able to show [your work] and have feedback and be able to watch people’s reactions to your work can really make you grow to appreciate your own work.” Darlison expressed a sense of gratification that came with the final product of the show and all the work that she had put into it: “I’m not happy that it’s out there, I’m happy because I put it out there.”

Furness emphasized the importance of having a place where it’s safe to experiment with exhibitions and potentially be unsuccessful: “Having a place where students can actually experiment with exhibiting and showing work is really important.… It’s kind of an interesting challenge to put work together in a space and make it actually function the way that you want it to.” Places like START “really provide an opportunity to mess up and have it be totally okay.” It’s safe to say, however, that no one messed up this time around.