Our Town with Chris Down 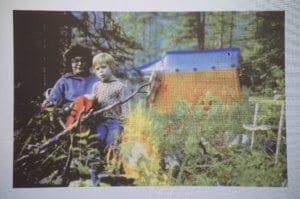 Last Wednesday, Jan. 31, a crowd of around 40 people gathered in the Owens Art Gallery for Our Town, a talk by Chris Down, a local artist and associate professor of fine arts.

Associate professor of fine arts Adriana Kuiper introduced Down. “Out of all the introductions I’ve done, this should be the easiest one. I’ve known Chris for almost twenty years,” she began. She recounted stories of time spent in their shared studio during graduate school, noting his marked ability to memorize episodes of The Simpsons to the very word. She then called Down to the lectern.

Before he presented his artistic journey, Down mentioned that the presentation would be roughly chronological. Down “uses art as a tool for navigating life.” Accordingly, many of his pieces are narrative or loosely biographical in nature. Quoting Edvard Munch, Down explained his aesthetic theory by stating “In my art, I tried to explain life and its meaning to myself. I also intended to help others understand life better.”

A notable example of Munch’s idea in action is an early work by Down titled Kamloops Lookout. In it, his son’s rough sketches are superimposed on an image of an empty car overlooking a lake, hinting at a memory Down shared with his father. “I was trying to come to terms with the fact that my father died when I was eleven,” he said. “I was a mediating point between my absent father and absent son.”

In 2001, shortly after graduate school and the events of 9/11, Down presented a body of his work in an installation called Abandon All Hope, intending to examine “ties between consumerism, white supremacy and militarism.” The installation, consisting primarily of drawings, focused heavily on restrained use of colour and liberal use of lines to convey a simultaneous sense of crowding and emptiness.

According to fine arts student Grace McCrea, there is an interesting disparity between his taught and practiced techniques. “It was very different from what I thought it would be, because of how he teaches in class,” said McCrea. She said that one of his earlier works especially stood out to her. “It’s very smooth and transitioned, not a lot of hard brushstrokes, which is what he’s trying to get us to do in class, but I liked it; it was definitely more my style,” she said.

After a critique by fellow artists in 2011 while on sabbatical in Miami, Down resolved move away from found imagery in his artwork and the influence of contemporary art, and toward conveying a sentiment or emotion. Fine arts student Alicia Bailey summed up Down’s artistic evolution, saying, “He started off trying to talk about the world and make a statement. It sort of evolved to him saying that art isn’t the space for that; there’s activism to be done instead of just making a painting of it. Art should be about capturing a feeling. That’s what art is necessarily for.”

Down ended his talk with some food for thought, drawing on a Matisse quote that reads, “What I dream of is an art of balance, of purity and serenity devoid of troubling or depressing subject matter – a soothing, calming influence on the mind, rather like a good armchair which provides relaxation from physical fatigue.” Although Down rejected Matisse’s philosophy in his younger years, he eventually came to agree, claiming that the process of creating art “is about putting artwork out that breaks from your own cynicism and detachment.”

Life in a politically charged world is taxing on the psyche. Down understands that exposure to media infused with larger themes and implications leads to the metastasis of cynicism and detachment. It was refreshing to take in Down’s art and not be called to action, not be shocked by the atrocities of the world or the uncertainty of the future, but simply to absorb the aesthetic of his work and feel something.