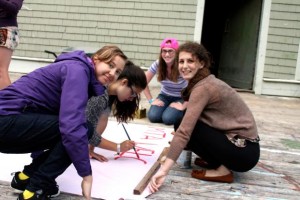 The Mount Allison campus was a little rosier last Friday, as the school experienced its first Pink Day. Students and other members of the Mt. A community were encouraged to wear pink to show their support in the fight against homophobia, transphobia, and bullying.

Pink Day is a student-run initiative, started by Josh Carr, a fourth-year student. After he and his boyfriend were recently victims of homophobic harassment, he met with Melody Petlock, the Sexual Harassment Advisor and S.H.A.R.E. (Sexual Harassment and Assault Response and Education) Coordinator, and decided to initiate the event.

“Our goal with Pink Day is to show—in a very visible way—that everyone is welcome here, and that negative expressions and behaviour are not acceptable,” said Petlock “By having everyone show up wearing pink on the same day, we can show anyone who is worried or afraid just how many people are here to support them and back them up.”

In order to further publicize Pink Day, banners were placed in the student centre and other locations, posters were passed around, Facebook events were shared, and members of the Get REAL campaign, another student group on campus, sold bright pink hats with the slogan “Get REAL” written on them on the Wednesday and Thursday prior to the event.

“Unfortunately, homophobia, transphobia, and other forms of bullying and harassment are still a thing on campus and it is just unacceptable!” said Carr. “By wearing pink, staff and students are spreading awareness of this issue. Nobody should feel as if they’re less of a person based on sexual orientation.”

Carr emphasized that Pink Day was not only about taking a stand, but also a means of letting students know that if they are victims of homophobia or bullying, or if they witness someone else being harassed, that there are resources to which they can turn.

“I’ve always said that bullying, harassment, homophobia, and transphobia can sometimes happen when people aren’t looking. With this information and greater awareness, Mt. A can only become a safer place for all students,” said Carr.

This year, Carr plans on working as a Peer Educator for the S.H.A.R.E. program, and in doing so will continue to talk to each residence about the issues of homophobia, transphobia, and bullying. While Mt. A is widely seen as a fairly accepting campus, initiatives such as Pink Day, and the presence of peer advocacy groups, remind students that some occurrences of discrimination do go undetected, here and elsewhere.

In 2008, Statistics Canada issued survey results indicating that LGBTQ youth and adults experience violent victimization including sexual assault, robbery, physical assault, and discrimination at rates three times higher than that of heterosexuals. In addition, students who were harassed reported lower grades (twenty-four per cent), higher absentee rates (twenty-seven per cent), greater depression (fifty-five per cent), and were more likely to make plans to commit suicide (thirty-five per cent) when compared to their heterosexual peers.

“Many [people] don’t realize how using negative or pejorative expressions or labels related to sexual orientation or gender identity can marginalize, harass, and ostracize others,” said Petlock. “Some students who have been harassed disengage academically and, sometimes, end up leaving university.”

Pink Day was only the first of various initiatives that are planned to be held by committees on campus, such as the Spot the Dot Campaign, Catalyst, and, as previously mentioned, the Get  REAL Campaign. These groups, along with the various other support systems on campus, encourage all students to report any negative activities to SHARE at: [email protected].