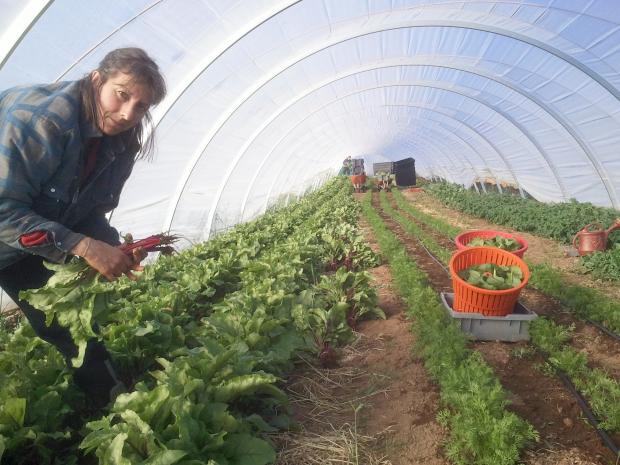 Canada’s population growth rate is approximately one per cent. This year, the global population is just over seven billion people, and it is expected that by 2050 that number will rise to eleven billion. This growth, in addition to climate change, places immense stress on the environment, resulting in environmental degradation. This has created an unforeseen state for the world’s food security. Food security depends on food systems availability, access and utilization. Food security is achieved when all people, at all times, have physical and economic access to sufficient, safe and nutritious food to meet their dietary needs and food preferences for an active and healthy life. Today, food systems are changing around the world as globalization and urbanization allows for faster distribution. As a consequence, food has become global rather than local, as globalization allows food to be transported around the world with ease. In Sackville, the majority of residents rely on global food available at the local Save Easy and Co-op, as there are only a few local food suppliers in the area supplying the local farmer’s markets.

Global climate change has shown diverse effects on the environment, which has inadvertently affected the agriculture industry. In the future, temperatures are expected to rise as well as the amount of precipitation. Furthermore, the intensity and number of floods and storms is also expected to increase. Each of these issues will likely affect crop production around the world. Increased temperatures may allow some crops to grow more quickly, but faster growth can also lead to smaller crop yields. This could negatively impact the agriculture industry, as the optimum growing temperature for many crops will be exceeded. Extreme flooding and repeated salt intrusions can also harm and reduce crop yields. Increased precipitation in the past has caused substantial economic loss for the agriculture industry. For instance, over the last fifteen years more than fifty-seven communities in Atlantic Canada have been affected by flooding, resulting in over forty million dollars in damage. In conjunction with rising temperatures, global sea levels are also expected to increase. Together with temperatures, storms and precipitation the environment and infrastructure (including transportation routes and buildings) will be negatively impacted. If flooding destroys transportation routes it is likely that food security will be lost, globally as well as locally.

The province of New Brunswick has a population of approximately 750,000 people. A population of this size consumes approximately 1,462,500,000 pounds of food per year, eighty-five per cent of which is imported. Since 1941, the number of farms in Canada has declined as globalization and urbanization increased. Globalization and urbanization have negatively impacted developed countries; humanity is isolated from natural processes and the countryside where food is produced. Therefore, it is important to change current food systems and begin mirroring the ways of traditional food systems by growing and buying food locally. Growing food locally gives people a relationship with nature, more power and a sense of community and stewardship.

In Sackville, a variety of different farms can be found. Census Canada suggests that the general Westmorland area is home to approximately seventy farms. Types of farms include cattle, hog and pig, poultry and egg, sheep and goat, oilseed and grains, vegetable and melons. Of these farms there are two prominent farms supplying the Sackville area with local food: Nature’s Root Farm in Point de Bute, and Dixon Farms in Aulac.

Nature’s Root Farm grows vegetables and lamb in an ethical, sustainable and responsible way. It not only supplies Sackville with locally grown food, but they also sell at the Moncton and Dieppe farmer’s markets. Dixon farms, on the other hand, supplies the local food economy with a variety of meat products. In addition to local farms, Sackville also maintains a community garden. The community garden houses forty-nine plots and a community food forest contributing to the areas local food security. Local farms provide a semi-local food economy for the Sackville area. Conversely, community members who depend on the Save Easy or Co-op as their main food source still consume imported global food. In the future, food imports will impact food security as climate change might affect transportation routes present today. If an 8.9 metre flood were to occur, Route 2 and the CN rails from Nova Scotia to New Brunswick would be inoperable. On a local scale this destruction would place immense pressure on Sackville’s food security, as Nature’s Root Farm and Dixon Farms are located just outside of town. If Route 2 becomes inoperable transportation would not be possible between these towns and Sackville, reducing the amount of local food these farms could provide. Taking a closer look at how a local farm would be impacted by climate change and the potential loss of transportation routes would be beneficial.

Nature’s Root Farm has been owned and operated by Kent and Ruth Coates since 2006. As previously mentioned, the farm currently grows a wide variety of vegetables and raises lamb. The owners have created a community supported agriculture farm (CSA). This means that the goods produced are grown for customers signing up for weekly vegetable packages. Nature’s Root Farm helps protect Sackville, Moncton and Dieppe’s food security as they supply these areas with a large quantity of goods. In 2012, the farm’s top five crops included carrots (twenty per cent), potatoes (ten per cent) and lettuce, broccoli and beats (five per cent). In 2013, a total of eight acres are being prepared for production. However, to supply customers in Sackville, Kent and Ruth must take the Trans-Canada Highway Route 2. As the effects of climate change increase and worsen, 8.9 or even 9.7 metre floods are more likely to happen. If either of these flood scenarios occurred, Route 2 would be flooded and transportation would not be possible between Aulac and Sackville. If transportation ceased as a result of flooding, Sackville’s food security would be jeopardized.

Today, the United States economy depends on tractor-trailers to deliver seventy per cent of all freight annually. Even if climate change does not affect Sackville in the immediate future, it may affect other transportation routes that could damage Sackville’s food security, as the seeds and fuel used by Nature’s Root Farm are global commodities. For instance, the seeds used by Nature’s Root Farm come from around Canada and the United States (PEI, Ontario and Maine). If transportation routes are even remotely affected, global commodities such as fuel will cause large changes to Canada’s globalized society. If Kent and Ruth, like other farmers in the same situation, are unable to acquire seeds or fuel, production of crops may be hindered. So, how can you help protect Sackville’s food security?

As the world becomes increasingly globalized the Canadian society must revert and become more local. How can a single individual help out? You can first start to buy local. Buying local supports local farmers like Ruth and Kent of Nature’s Route Farm. This supports local economies, as well as reduces carbon dioxide emissions due to shorter transportation routes when compared to long flights or shipping routes for global food transport. You can also start driving less, use energy efficient light bulbs, choose renewable power, recycle, reuse, reduce and fly less. Reducing carbon emissions is the first step in reducing the effects of climate change. This will protect our transportation routes as well as our food security. In the future you may not live in Sackville, but these practices can be used around the world. Eat locally and live sustainably.