Students look past university towards the workforce 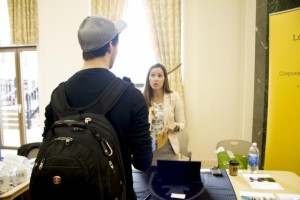 As prospective May graduates turn their thoughts to post-graduation options, some of the more career-minded among them  gathered in Tweedie Hall to shake hands and exchange information with potential employers. The event was part of career week, an attempt to encourage students to start thinking about their future.

Across Canada, university students struggle to find work after they graduate. According to Statistics Canada, “the unemployment rate of youths aged 15 to 24 was 14.3 per cent, compared with a rate of 6.0 per cent for workers aged 25 to 54 and workers aged 55 or older” in 2012. With layoffs more common with youths than adults, the prospects for many Canadian students are grim.

Makyla Walerickton, a fourth-year geography student, was unsure of her plans after next year.

“Eventually I want to be a midwife,” Walerickton said. “That’s a four year program. I’m not going to get in the first three or four times I apply. That’s just the nature of the program.”

Walerickton, like many others, might continue her education with a masters program while waiting for career opportunities.

“It’s terrifying. Being in school is the easy way out, very much so,” Walerickton said.

But last week, the future seemed less menacing for some Mount Allison students as the Ron Joyce Centre for Business Studies hosted career week, an opportunity for students to explore their options following graduation.

“Whether you’re going right into the workforce or you’re thinking about grad school, or you’re not entirely sure, it’s time to start thinking about it,” said Rebecca Leaman, the career services coordinator at Mt. A.

The week had six events, including a resume workshop, a social media how-to, a meet and greet with commerce professors, a career fair, an RCMP presentation and a business panel.

While many of these events were exclusive to commerce students, some tried to include Mt. A students from other departments.

The main event of the week was the career fair, where 13 companies gathered in Tweedie Hall to speak with and recruit students.

“It’s great practice just to go out and introduce yourself, ask about a company and make small talk with a stranger who could potentially be an employer some day,” Leaman said.

Leaman, who organized the career fair with the help of the commerce society, said that around 50 per cent of attendees were fourth-year students.

“I think that is something students aren’t really aware of how important that is going to be until they are facing down fourth year and have to try to find a job.”

“We are a financial organization, so we are looking for people with a commerce background, and the majority of folks coming through have that,” said Sarah Banks-Anderson, a recruitment consultant with RBC.

Students flocked around the J.D. Irving table in particular, which had multiple representatives. Kristen Drapeau said she was pleased with the turnout and environment at the career fair.

“I’m seeing a lot of potential in the students that we’ve had conversations with,” Drapeau said. “They’re not just looking for a job, they’re looking for a career, which I really can appreciate as a recruiter.”

Drapeau said that the size and diversity of Irving was compatible with that of Mt. A.

Although the career fair catered to graduating students seeking potential jobs, career services will host another career fair in February  that is more focused on summer job opportunities.

The final event of the week, a business panel featuring not-for-profit organizations, drew over 140 students to Tweedie Hall. The theme was dramatically different from last year’s business panel, which was entrepreneurship.

A day after the career fair with large corporations like RBC and Irving, the panel examined different options for Mt. A graduates. Debbie McInnis, the executive director of the United Way of Greater Moncton and one of the four panelists, said that the panel raised an imported discussion.

“From my perspective, it was about looking at other alternatives for employment, and how you can give back to your community.”

Daimen Hardie, a Mt. A alumnus and the program director and co-founder of Community Forests International, said that the students were receptive to the message.

“We got some good comments afterward. I think there are probably some people who had maybe written off the idea of working at a not-for-profit because of some misconceptions about what that involves.”

Like the companies at the career fair, many of the local not-for-profit organizations were interested in attracting students.

“With a lot of these causes that are so important to society, not-for-profits need to attract the brightest minds,” Hardie said. “They can’t always do that with salaries, so we look for other ways.”

Most of the events, despite their inclusion of all departments, were dominated by commerce students. The career services office started at the Ron Joyce centre, and catered primarily to commerce students until it moved to the Wallace McCain Students’ Centre.

“I think it will continue to evolve and expand to cover the rest of the university,” said Rosemary Polegato, a professor in Mt. A’s commerce department.

Ben Wilson, a Mt. A alumni who graduated last year with a commerce degree, said that although he had multiple job  opportunities after university, none of them came from Mt. A’s career services department.

“I think our career services office can do better in terms of offering more opportunities to students who are not based in commerce,” he said.

The commerce department and society supported and endorsed career week. Commerce classes that overlapped with the event times attended them to increase participation. Professors contributed by ensuring tests and large assignments were not due during the week.

“This is important enough, and the quality is high enough, that it totally makes sense to support this activity,” Polegato said. “It’s what we hope for our students; that you’re here to think about what your life will be like, as well as what your work will be like.”

Leaman said that although the pressure to find a job or pursue a career is high, events like career week can provide a low-risk environment for students to explore their options.

“Being prepared, thinking about life after Mt. A, it’s overwhelming for students, but there is a lot of support on campus,” Leaman said. “Just remember to seek it out.”