Claim our Bodies, Claim our Right, Take a Stand, Take Back the Night! 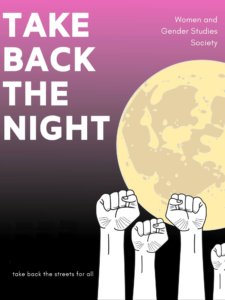 Mt. A hosts third annual Take Back the Night in support of people who have been impacted by sexual violence

Last Wednesday night, members from Mount Allison’s Women’s and Gender Studies (WGST) Student Society and other Mt. A students joined together for Take Back the Night, a protest for women and people of other genders who do not feel safe walking the streets at night alone. Take Back the Night particularly shows support to those who have experienced sexual assault or know someone who has.

Natalia Liste Colomina, a fourth-year Mt. A student and the president of the WGST Student Society, discussed the lack of support this year’s Take Back the Night got from Mt. A professors and peers. Colomina explained that last year there were more people involved in Take Back the Night: “We had the VP of student life coming out, a lot of people from the faculty, and this year we haven’t seen anyone support us as students.

“It kind of shows that even though there’s a lot of talk and we may look good on paper, there’s a lot of work we need to do as a community to actually be there for each other,” said Colomina. “It’s important to show up and it falls all on the students once again.” Student support was also down from previous years with fewer than 20 students participating in the march, including the organizers.

According to Take Back the Night’s website, this organization is the earliest worldwide movement to stand against sexual violence. It began in the 1960s in Belgium and England as a response to how women were not safe walking down the street alone. Take Back the Night events have taken place in over 800 communities in 36 countries.

The event started in front of the Wallace McCain Student Centre with a few opening remarks. Seena Katayama, the WGST Society’s liaison, opened by acknowledging the unceded land on which Mt. A stands. Katayama then began to thank those who came to the event.

“I’d like to thank everyone for coming. We’re very grateful for the support that we have today,” said Katayama. “I’d like to thank the current team for putting this event together with all the emotional and physical heaviness that it comes with.

“This event is also to acknowledge the safety issues and fears that marginalized groups face, and to end sexual assaults, domestic violence, dating violence, sexual abuse and all other forms of violence,” said Katayama.

Katayama also gave a disclaimer, reminding the group that some of the topics discussed in relation to Take Back the Night have very disturbing details, and some of the stories and messages are hard to listen to. The WGST Society let the group know that if they felt uncomfortable they were more than welcome to step away.

“Conversations and events like this start conversations all around campus,” said Paige Percy, a fourth-year Mt. A student who is a SHARE coordinator. “We stereotypically think about statistics, but a lot of this is all lived experience.”

At the event, Percy, the president of Mt. A’s Rose Campaign group and Because I Am a Girl group, also shared her own personal experience about walking home late at night in Sackville the other week. “I’m walking home and then all of a sudden, a man crosses the street and starts walking behind me. I start to panic, and then all of sudden you’re thinking, ‘Who’s awake? Who can I call? What’s going to happen if something happens?’ ” said Percy. “And [the man] ended up just being someone I knew.”

The WGST Society also mentioned other resources available on campus for anyone who may need them. SHARE is the sexual harassment and assault response education team. They also mentioned that Patty Musgrave is available as the Indigenous Affairs coordinator, as well as Ivan Okello, Mt. A’s new Black student advisor and diversity educator.

“This event for all that do not feel safe walking at night, which includes but is not limited to trans people, cis women, non-binary people and Indigenous women,” explained Katayama. According to Statistics Canada, women who are young, Indigenous, gay or bisexual are at a greater risk of being a victim of sexual assault.

“In any Canadian university, plagiarism will get you expelled, cost you your degree, and will most likely get you banned from attending any university,” began Michelle Roy, a fourth-year student who is the vice-president of the WGST Society and volunteers for SHARE. “Sexual assault at university will get you a note on your file, and the possibility of getting switched to another class. If you choose to make yourself public, there might be the potential of having your attacker only expelled from attending the university in which the incident occurred.”

According to the Canadian Federation of Students-Ontario, one in five women report being sexually assaulted while a student at a university in Canada. Roy also said these statistics are three times higher for Indigenous women, women of colour, disabled women and people who identify as queer or trans.

Roy then spoke about why she is participating in Take Back the Night and why she believes that Mt. A is failing students in their ability to make students feel safe on campus. “I’m here today to acknowledge that Mount Allison University has a problem with sexual violence on their campus,” said Roy. “Mount Allison has a requirement to keep the students safe, and they have failed us. There’s no community without accountability. I’m here today to give accountability to not only Mount Allison University but to all universities in their lack of protections they offer students against sexual violence.”

After the opening remarks, with bright posters in hand, the group began their march through the Mt. A campus and Sackville downtown. Beginning at the Student Centre, the marchers went down York Street, where they made a loop by the Guardian and the United Church on Main Street, coming back up York Street through campus to the North Side quad. From there, the group marched through campus up by the chapel, through the academic quad and then made their way toward the South Side quad. From there, they travelled back to the Student Centre, shouting chants like No Justice, No Peace as well as Feminists United Will Never be Divided.

“I personally can say that this was really empowering,” said Colomina. “You either have been a victim of [sexual violence] or know someone that has been impacted [by] it, so I think this is very important for all of us.”

Take Back the Night is intended to support those who have been impacted by sexual violence and sexual assault. Its goal is to make students feel safer in their own experience at university.

“Sexual violence should not be part of your university experience,” said Roy.