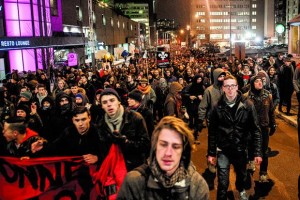 MONTREAL (CUP) — March 23 became the first day of student anti-austerity strikes with five faculties boycotting their classes and having their act partially validated by the university’s decision to cancel classes.

Undergraduate classes for the Fine Arts, Philosophy, Geography, Women’s Studies, and the School of Community and Public Affairs were cancelled by the school, which billed the move as a ‘day of dialogue.’ Graduate students in Philosophy were also a part of the strike.

This follows a series of student assemblies that have so far all voted to pass strike motions. In addition to the above, some of the others to join the strikes have been the Political Science Students’ Association and the Liberal Arts Society.

At the same time other student organizations like the Geography, Planning and Environment Graduate Students Association will soon decide whether they want to join the movement.

Most have picked March 23 and April 2 as the days to leave their classrooms, coinciding with province-wide student strikes aimed at pressuring the government into rethinking budget compression measures they say are essential for eliminating the deficit.

Some student groups, like Students of Philosophy Association (SoPhiA), have voted for significantly longer strike actions—in this case, an additional week of striking from March 26 until April 2.

The university administration said March 23’s strike would be the only ones officially sanctioned.

The anti-austerity movement isn’t one solely rooted in the students and support has also come from other directions within the university. Concordia University’s Part-time Faculty Association (CUPFA) recently announced their support for the student strikes, saying they considered the tactics as a legitimate form of opposition to the government and not levelled against the university itself or any of its staff and faculty.

However, CUPFA equally distanced itself by saying it reserved a right to protest against austerity in their own way. Still, the union announced its members could support the student movements in other ways, such as organizing curriculum workarounds to accommodate the strikers.

To deal with the possibility of escalation by student picketers denying entry to classrooms, it instructed all teachers to report for class as usual and ask to be let in. If denied, the teachers were to file a report but under no circumstances engage in physical contact or altercation.

Concordia’s Teaching and Research Assistants of Concordia (TRAC) has likewise instructed its members to report for duty but respect the picketers.

With larger province-wide public protests ramping up for April and May, the continuance of such tactics is almost certain to expand. Student organizations will have plenty of time to mobilize to either continue with additional strikes or join the movement.

How this will affect the successful completion of the semester for certain faculties is unknown.