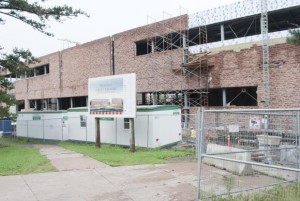 Students returning to school this September will notice some dramatic differences in the Mount Allison landscape. Aside from the noticeable work on the arts centre, there have been a number of other changes, such as residence improvements and the restoration of Black House. But not everyone shares the University’s enthusiasm for renovation. The faculty union in particular has been critical of the administration’s construction spending.

Recent Mount Allison Faculty Association (MAFA) media releases have questioned the administration’s spending on buildings relative to perceived neglect of academic programs. A June 2013 MAFA newsletter raised concerns over issues such as the failure to replace many of this year’s sabbaticals, as well as the increasing ratio of contract faculty.

Since 2006, the number of contract academic staff has increased by over sixty percent while the ranks of tenured faculty have increased by two percent. Mount Allison University has run balanced budgets for the past twenty-two years and has an endowment of over $100 million.

There has been obvious progress on the Purdy Crawford Centre for the Arts. The tentative opening date of the building remains Fall 2014. However, the Centre continues to be an object of some controversy, as the University is now contributing $10 million of operating money over six years as opposed to the originally planned ten, more money per year than initially thought.

Renovations on the historic Black House, also known as Hammond House, were completed over the summer. Black House is resuming its former role as the president’s residence. The house, built in 1896, was the home of Mt. A presidents from 1958-1975. The current President and Vice-Chancellor Robert Campbell and his family moved into their new home in August.

While there were initially many concerns about cost, an August news release boasts that the $1.3 million refurbishment of Black House was funded by the sale of the former presidential estate, Cranewood, and by a donation that has been pledged but not yet publicly announced. The presidential residence hosts many events over the course of the year.

More renovations are underway on the south side of campus, with Bigelow House temporarily closed for the 2013-2014 academic year. Some of the improvements include the creation of single ensuite rooms; new flooring, sprinklers, and lighting; bathroom renovations; and many more general improvements. In a June news release, President and Vice-Chancellor Robert Campbell said, “Though temporary, the decision was difficult to make given the history and spirit of Bigelow. The decision was one that made sense in terms of the health and viability of the entire residence system, a feature that is integral to the Mount Allison student experience.”