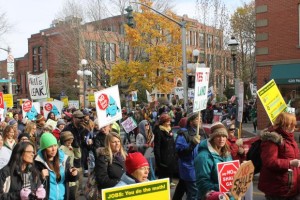 Around 400 protestors gathered outside in downtown Fredericton to protest shale gas development in the province at the opening of the New Brunswick Legislature. The Council of Canadians says around 650 participated, while police surrounding the event put the number at between 300 to 400 demonstrators.

New Brunswick Premier David Alward refused to meet with the protestors, and told The Globe and Mail, “Chief [Candace] Paul has made it quite clear where her position is on resource development and at this point in time I don’t see what would be gained.” The government has repeatedly framed the gas exploration as a necessary injection of money for the economically depressed province.

Given the widespread opposition among the members of her community, Paul said Alward’s refusal showed “a lack of respect.”

“I am truly disappointed with our premier. He commented that it was pointless to meet with me,” she said.

A diverse cross-section of New Brunswickers were represented in the protests, with students, members of the United Church, First Nations peoples, labour organizers, and many others gathered to protest. About ten Sackville residents, mainly members of the Tantramar Alliance Against Hydrofracking, made the trip to Fredericton, along with ten Mount Allison University students.

The protest began on the front lawn of the legislature, eventually marching downtown through Queen Street, Regent Street, and King Street under police escort. After the march was concluded, protestors went to a lot across the street from the legislature where local First Nations groups had set up a variety of traditional structures.

Members of the St. Mary’s First Nation erected a traditional Wolastoqiyik—commonly referred to as Maliseet—longhouse housing a sacred fire. Members of the community tended the fire day and night for thirteen days, dismantling the longhouse on Nov. 6.

Representatives from the Mi’kmaq and the Penobsquis First Nations also erected traditional structures on site.

The lot, and the provincial legislature, are on what is considered to be traditional Wolastoqiyik territory. Many activists lauded what is seen by some as the first effort by the province’s different First Nations to work together to represent their interests.

A number of speakers addressed the crowd gathered by the longhouse, from the back of a parked pickup truck. Speakers included Harry Laporte, Grand Chief of the Maliseet Grand Council; Candace Paul, Chief of the St. Mary’s First Nation; Arren Sock, Chief of the Elsipogtog First Nation; Daniel Légère, General Vice-President for the Canadian Union of Public Employees (CUPE) NB; Hugh Acagee, Chief of the Passamaquody First Nation; and others.

Clan Mother Elma Brooks of St. Mary’s alluded to the controversial lack of treaties ceding land from First Nations to the provincial government.

“We have the right to say no, and that’s based on our title, our sovereignty. That’s based on our treaty rights, and the fact that we have signed treaties at all. Only sovereign nations sign treaties. We have not pushed or ceded any of those rights,” Brooks said.

Elsipogtog chief Arren Sock said that he thought the people of Elsipogtog are acting as any people would to protect their environment.

“When we started off, trying to protect what little we have surrounding Elsipogtog, I didn’t think it was going to get this big,” Sock said.

Protestor Daniel Goudreau of Pointe-du-Chêne said he was participating to raise awareness about the fracking process. He said it is important for people to educate themselves on the issue because “the government is not revealing everything to the public, and a lot of the media has been treating this with bias.”

Fredericton District Labour Council President Alex Bailey represented the labour movement in the Fredericton region, and said, “We do not believe in jobs at all costs.”