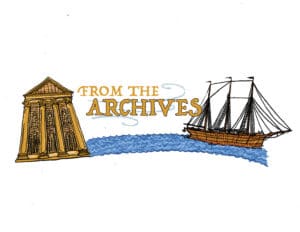 From the archives brings you old news today. As time passes, the news we report on changes, as does the way we report on it. Conversely, we’ve been covering some of the same issues since 1872. Students in residence will have to contend with many fire-safety briefings and drills this year. This 1975 incident in the basement of Hunton House may make everyone a little more grateful for the endless lectures.

The smallest of fires can be startling, even frightening, but a fire which results in a residence full of smoke merits grave consternation. On Wednesday at approximately 3:00 p.m., one of the dryers in Hunton House caught on fire which resulted in billowing clouds of smoke in the basement, stairwells and floors. One student on third floor emerged quietly from his room and was unexpectedly confronted with a smokey wall so dense that he could not see across the hall to the door opposite him.

Luckily, no one panicked! A group of boys who had been playing ping-pong at the opposite end of the residence quickly grabbed the nearest fire-hose (water-filled) and traced the smoke to its place of origin. They discovered that a dryer was, in fact, on fire. Because the boys looked before they leapt, they remembered to disconnect the electricity, for water used to douse an electrical fire could’ve spelled disaster.

In the meantime, however, residents on the other floors were not certain of the source or the seriousness of the fire. They pulled the alarm only to discover that those in the residence weren’t functioning properly, due to the electrical disconnection. Everyone quickly evacuated the building via the fire escapes, the fire was put out and no one was hurt.

The issue, however, is not what happened but what could have happened. It is conceivable that someone with less calm could have easily acted upon impulse and sprayed the fire directly with water. It is the contention of this reporter that water extinguishers are a little too antiquated for residences with so many electrical appliances, (washers, dryers, stereos, etc.)

The Department of Buildings and Grounds did not fail to look into the issue. They examined the dryer and discovered that the fire did not result from faulty wiring in the machine itself. “The clothes in the dryer,” Ken Munro suggested, “could have had something in them such as matches.” He admitted however, that the owner of the clothes in the burning dryer was not a smoker. Perhaps something else in the dryer did cause the ignition. Certainly if an electrical committee ascertained that the fire had no electrical source, it did not. This still does not alleviate the problem of other electrical fires, however. How can such fires be dealt with in a building which does not have proper equipment? Ken Munro stated that the office of Student Affairs was looking into the issue. How long will it take them to act, however? Perhaps this article will elicit a little feedback.

Thanks are in order to the boys in Hunton House who saved their residence from an imminent inferno.