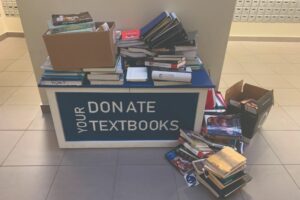 Post-secondary education is expensive for many students around the globe. Tuition, housing, and food are costly enough that many students have to take out loans to afford their schooling, and it doesn’t help that some professors require hundreds of dollars worth of textbooks for a single course.

With this in mind, Oluwalopeye (Lopsii) Olagoke, Senior Research Technician and Programmer at Mt. A., decided to create Tosmos (T-oz-mos), an online platform that enables users to sell their used textbooks to other students for a discounted price.

“We decided to create Tosmos because we found that there were two needs: the need for cheaper and affordable education materials and the need to reduce the amount of books going into landfills,” explains Olagoke. “In a survey, we found that 46% of students here at Mount Allison find it difficult to buy books. […] [In addition,] we are looking at 680,000 tons, which is the weight of two Empire State buildings, that goes into landfills annually due to textbooks. So, if there is such a huge waste, and people can’t afford [textbooks], there must be some correlation,” Olagoke elaborated. “What Tosmos is doing is connecting the students who have those books to the buyers who need those books, who can now buy them cheaper than those at the bookstores,” he said.

Tosmos was created in August 2021 and currently tailors to four post-secondary institutions in Atlantic Canada: Mount Allison University, Crandall University, Saint Mary’s University, and Acadia University. The platform is owned by Ooreva Software & Technology Inc., which is owned by Olagoke, and comprises a team of six, himself included. Ooreva and Tosmos were not created as part of Olagoke’s job as Senior Research Technician and Programmer, but rather, as a personal project. “We can’t call it a side hustle [anymore] because it’s expanding a lot faster than we thought […] and there’s a lot of dedication,” Olagoke explained.

When Tosmos was first created, it operated a bit differently than it does now. A year ago, Tosmos was simply a collection service on behalf of the students at Mt. A. Olagoke and his team would receive donated textbooks and repurpose them by either selling them back to other students or recycling them through the company Eco360. “Eco360 is a company that helps us properly recycle the books that students use on campus that they don’t want anymore. They decompose it and their facility generates electricity based off waste, so we have contributed from the waste that we’ve received on campus for them to generate electricity,” Olagoke elaborated.

So, how does Tosmos work?

“Tosmos is meant to be a marketplace that provides a close community for post-secondary students to buy and sell books within their institution,” Olagoke explained. If a Mt. A. student wants to sell a textbook through Tosmos, they must first register with their Mt. A. email. Similarly, if a student from any of the other three institutions wished to sell a textbook, they would also have to create an account with their school email. This feature guarantees that the person wanting to sell a textbook is, in fact, a real student, and not someone pretending to be a student. In addition, since Tosmos acts as a closed community application, it does not allow students from other institutions to buy or sell textbooks to students attending different schools. “We’re protecting the student, and that’s why we made it a closed-community,” said Olagoke.

Tosmos also acts as a mediator between the buyer and the seller to reduce the chances of getting scammed. “Our application guarantees a 100% refund. The money stays with us and if the buyer doesn’t get [their textbook], they get their money back,” he continued. “Here, we control it so much that you can’t really rip off anybody because the money doesn’t go to [the seller] until [they] can fulfill all the duties of delivering the book and making sure that the condition [they’ve] stated it as is good,” Olagoke added.

Furthermore, prices are not regulated on Tosmos, meaning that students can sell their textbooks for what they believe they are worth. In many cases, students will sell their textbooks cheaper than they are available on other platforms, such as Amazon or university bookstores, to try to earn some profit. Tosmos requires the buyer to pay a minute service fee at the end of every transaction “to help keep the application and the team going,” as Olagoke put it; however, it is a profitable organization with social impacts in mind. To keep these outside costs minimal for students, Tosmos has been sponsored by the MASU Green Investment Fund.

At the moment, Tosmos is only allowing textbooks to be sold on its platform, but Olagoke and his team hope to expand to other school materials soon. “[We are hoping to allow] anything that will be used by students within the institution in the next few months,” Olagoke explained. This could include course notes, lab goggles, lab coats, printers, and other course materials. When asked about the possibility of students selling exam questions, he responded, “if anything goes against our policies at that period of time, then we’ll make sure it’s not sold.”

By March, students attending St. Thomas University and l’Université de Moncton will be able to use Tosmos’ services as well. Olagoke’s team is also hoping to expand to other parts of Canada and to the United States in the future. “We’re hoping in the next two-and-a-half years that our platform will be accessible to all students in all post-secondary institutions in Canada,” Olagoke concluded.

To check out Tosmos, here is the link to the online website: https://tosmos.ca/.