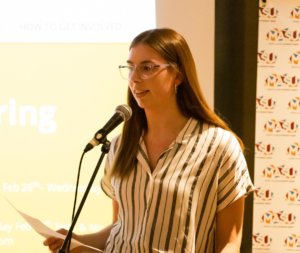 On Tuesday, March 10, MASU held their spring election speeches at the Pond. Students were running for arts, social science and science senators as well as valedictorian and Board of Regents representative.

Sixth-year student Brandon Blakney, running to be the Board of Regents representative spoke first. “I’m running my campaign based on three specific points this year,” he said. “First, to use my MASU experience as an existing senator to help continue and pick up where things were left off during the MASU transitional period for next year, and being a supportive mentor figure for the incoming senators.” Blakney also plans to work on improvements in communication between MASU and students.

Next to speak were the candidates running for senator positions. Two candidates from each section will be voted in.

There were four candidates for the science senator position. The first candidate was third-year student Angelica Whiteway. “I currently sit on the sustainability committee and have reached out to other environmental activist groups on campus who seem eager to work more closely with the MASU to achieve their goals,” she said. Whiteway plans to work closer with residences: “I would directly involve residence house teams.” She plans to meet with academic mentors and members of the house executive in order to address academic needs.

Spencer Keller, a second-year Windsor residence assistant, spoke next. “I want to address life at Mount Allison, if elected as senator, from two standpoints: medical and academic.” Keller plans to advocate for more medical professionals available on campus for walk-in hours. He also plans on helping students with academic guidance. “I want to introduce two extra advisors, one for first years and one for upper years. I also want to collaborate with senior students to develop a comprehensive recommended course list for each program,” said Keller.

Second-year student Shamus Tobin is also currently a residence assistant at Windsor Hall. “I have been able to hear about the concerns many of us have in common, such as trying to balance our packed schedules around classes and long labs, worrying about losing our scholarship after only our first year and being able to simply get an appointment with the Wellness Centre to get the help we need,” said Tobin. “It is for those reasons that I wish to be one of your next science senators.” If elected, he hopes to help address those concerns by advocating for lowering GPA requirements.

The final candidate for science senator was third-year student Maggie Pickard. Pickard has worked as a MASU health services coordinator and has sat on several committees, including the academic affairs committee. If elected, Pickard plans on advocating for students pursuing an international exchange. “I know first-hand how difficult it can be choosing courses for international exchange while keeping on track with your degree,” said Pickard. “I want to be a good advocate for students’ academic concerns.”

Next spoke the candidates running to be social science senators. The first candidate, second-year student Charlotte Roberts, said that she hopes to “open up new ways for students to voice their concerns in addition to the existing avenues.” Roberts also explained her reason for running for this position: “I really care about students getting an input in the decisions that will directly affect them,” she said.

The next candidate was third-year student Mike Cormier. “If elected, I plan to work closely with my fellow senators to fully represent the student body and their academic needs,” he said. Cormier hopes to advocate for “increased awareness of existing academic policies, such as scholarship appeals and scholarship reform in general.” He also plans on working on the change in GPA requirements for scholarships.

Finally, the candidates running for arts senators spoke. Both candidates, Linnea Bidder and Nadine Robinson, have already been in communication with each other discussing the goals they have for next year.

“I’m a firm believer that two heads are better than one and it is for this reason that I have teamed up with my fellow candidate Linnea. Her and I have planned to work together to make sure our unique backgrounds are utilized in the most beneficial way possible,” said Robinson.

Both have spoken to the next vice-president of academic affairs in order to make realistic goals about next year. Bidder and Robinson would like continued advocacy for mental health resources, course evaluation and establishing anonymous feedback boxes.

“I would love to create an online platform with Nadine where students can access MASU academic information, as well as summaries of the senate meetings, and be informed on academic events related to the arts,” said Bidder.

Finally those running to be valedictorian gave their speeches. The first candidate was Emma Kruisselbrink. Kruisselbrink’s theme for the valedictorian address was “a play on this year’s orientation theme, of what will your story be to reflect on what our story was.” She plans on speaking about Mount Allison’s community feel, individual learning experiences and why people chose Mt. A.

Arianna Woodley proposed a theme of what you want to be remembered for. Woodley believes that she would be a good representative of the graduating class. “Mount Allison prides itself as being a very inclusive and diverse campus and I do believe that my lived experiences will not only represent a small proportion of the university campus but the larger one in general.”

Everett Patterson hopes to share a collective narrative on what it has been like to be a Mt. A student during these years. “Things have changed a lot since we first set foot on campus here. We have a new president, many freshly renovated buildings and most of the students that were here when we arrived have since left. But none of these size up to the changes we have undergone personally during our time at Mount Allison.”

Next spoke Nigel Verret. “I would like to share with you what I believe makes Mount Allison University home,” said Verret, who would like to address what makes Mt. A different and special. “While discussing what makes Mount Allison home, it is inevitable to mention the memories and moments shared that we will cherish forever. It is also natural to celebrate our accomplishments.”

Candidate Sarah Gordon said that she would like to speak on behalf of Mt. A and what the experience has been like. “I love Mount A, I just would really love to have the opportunity to share some of that love back with you in May.” Gordon would like to share the love she has for Mt. A along with her experience on campus. “This is such a special and fun campaign for me because I love everybody in this class and I’m really excited to be with all of you on that stage in May.”

Claire Genest said that “Graduation is a time to reflect on the whirlwind that has been our degree at Mt. A.” Genest plans on basing her speech on the experiences had at Mt. A. “If elected valedictorian I would like to bring to life the complexity and uniqueness of the class of 2020.”