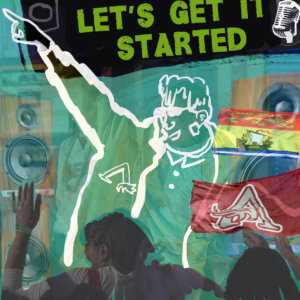 Students learned more about their rights and their student government’s plan for rest of the 2017-18 academic year at MASU’s Annual General Meeting on Oct. 24 in the Pond.

The meeting started off with guest presenter Rob Burroughs, from the New Brunswick Student Alliance (NBSA/AENB), speaking on the role that NBSA/AENB plays in lobbying for students. “It’s to the credit of the students that we have this,” he explained.

He described the process of their work as “we hear from you, make notes, do research [and then] go to the government” for the purpose of bettering student life.

One of the largest projects that the organisation has worked on recently is the Free Tuition Program. Mt. A students each contribute $4.92 as part of their standard fees to the University, which goes toward allowing 273 students in need to attend Mt. A tuition-free. This Tuition Access Bursary was instituted by the New Brunswick government to be implemented for the 2016-17 year.

New policies that the NBSA/AENB will be working toward in the near future include funding for sexual violence support services on top of SHARE, sexual violence legislation and policy on campus, Indigenous cultural education training, funding for mental health intervention programs, a New Brunswick debt relief program and an experiential learning program providing funding for non-STEM students.

Following Burroughs’s presentation, the MASU executive members all gave short presentations detailing their roles and plans for the future.

President Sara Camus informed attendees of her daily responsibilities and the boards that she sits on, including, but not limited to, the board of regents, council and the NBSA, of which she is the chair. She also addressed that this is President Robert Campbell’s last year in his position and briefly referenced the role that the MASU performs in hiring a new president. Camus said that she will keep students in the loop as much as possible and that candidates are currently being reviewed and will be interviewed soon.

Most presidential search information will remain confidential in order to protect applicants, but the ideal start date for the new president would be June 1, 2018. Students will be provided with more details in the winter semester when more developments have taken place.

Next to speak was Rachel Howlett, the vice-president of academic affairs. Her role is largely composed of sitting in senate and advocating for the academic success of students. In regard to senate, she noted that Arts Senator Kiera Stel had recently passed a motion to make the November reading week permanent. She also said, “We will be bringing forth a de-stress den in the room next to the girl’s bathroom on the red floor [of the R.P. Bell Library].” They are hoping to open up the current office space in this section, making it into a conference room with dividers.

Danica Garner, vice-president of external affairs, discussed her role as an advocate for students, including off-campus students, and her role with the NBSA/AENB. She listed housing-related issues and improvement of the MASU airport shuttle services as examples. “I do have a new model I have in mind … so please stay tuned,” she said of the shuttle.

Emma Miller, vice-president of student life, talked about her work on the nationwide Keep It Social alcohol awareness campaign that is present on campus, as well as her willingness to hear about any non-academic issues that students may have. She also addressed her interest in increasing study spaces for students, mental health workshops in residence and accessibility on campus. One way that she wishes to address the problem of accessibility on campus is by holding an Accessibility Coffee House. This event would include residence and off-campus acts, in order to hopefully raise funds to construct ramps for both the Athletic Centre and Convocation Hall.

Cole Cadorette, vice-president of finance and operations, turned the talk to money. His role is internal. “MASU operates as a non-profit organization to get the most for students that it can,” he explained, before providing brief explanations of his responsibilities in managing money and co-chairing the HR committee.

Finally, Emelyana Titarenko, vice-president of communications, spoke on the topic of yearbooks, press releases and her presence on the MASU social media platforms and website, as well as on CHMA on Mondays at 9 p.m.

The meeting was followed by the opportunity to network and win door prizes. All executive members expressed their wish to be approached at any time if anyone had any questions, either that evening or throughout the year. In closing, Titarenko specifically said that if anyone had any questions, she was in her office a lot and to “please stop by there.”